How to run special offerwall promotions that boost revenue and retention 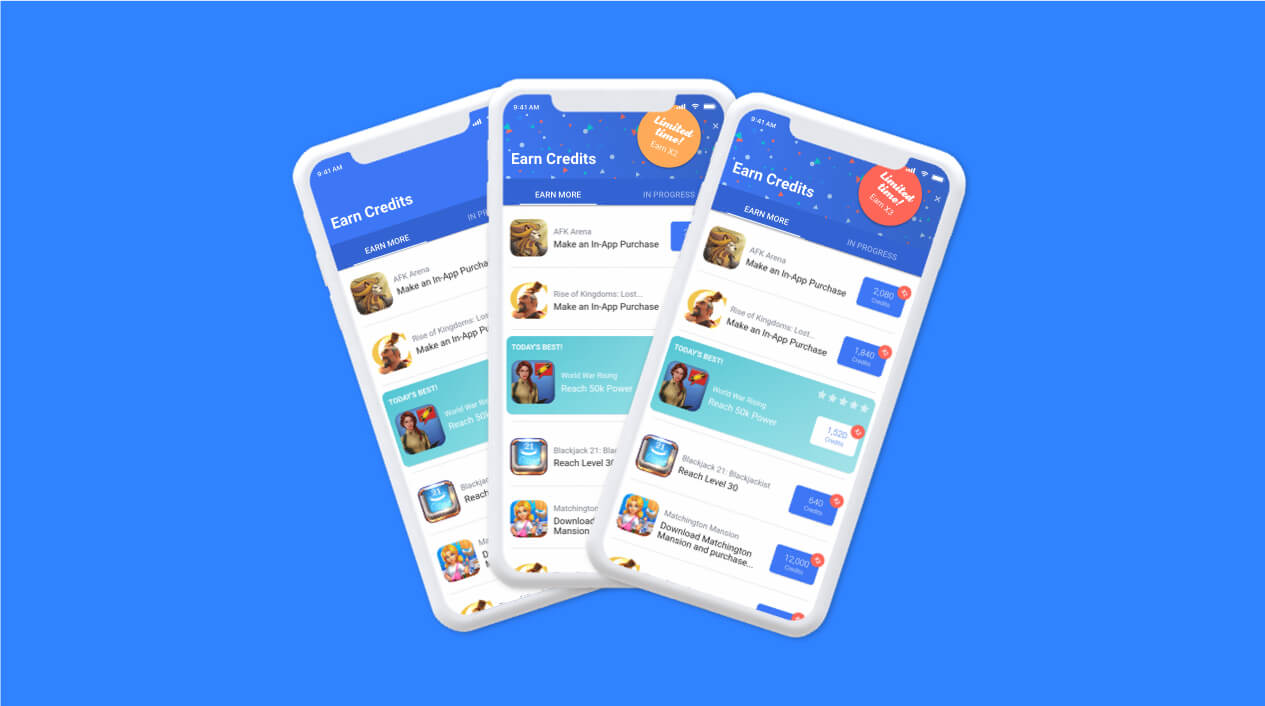 The more downtime we have, the more we’re on our phones - which is why app engagement typically spikes during weekends and holidays. By doubling down on this uplift in traffic with special promotions, developers and advertisers can both boost their revenue and acquire high ARPU users at scale. Here’s some data on how special promotions can impact your business - plus tips on when to run them and how to make them stand out.

What are special offerwall promotions?

On holiday weekends throughout the year, like Christmas or Thanksgiving, these time-limited promotions offer users anything between 1.5 to 10x the standard offerwall reward in return for completing a task like playing an advertiser’s game and reaching the end of a level.

What are the benefits for developers and advertisers?

It's not just users who reap the rewards: a long list of our developer partners use special promotions to increase performance metrics like engagement rates, ARPDAU, and revenue. In fact, our data shows that, compared to a regular weekend, doubling rewards during special promotions can generate a 70% increase in revenue while tripling them can generate a 110% increase. Meanwhile, engagement rate jumps 60% for doubling rewards and 65% for tripling them. The benefits for developers don't stop there: special promotions also boost long-term retention and in-app purchases, as the credits enable users to progress further in the game and give them a "taste" of what IAPs can offer them.

This boost in revenue sparks a cycle of growth - once the developer multiplies their rewards, it’ll attract more players to engage with the offerwall. Then advertisers leverage the increased traffic and raise bids to increase the rewards even more, resulting in even more traffic, installs, completions, and D7 ARPU. Our data shows that advertisers who raise bids during special offerwall promotions see a 56% increase in completions, compared to just 7% for advertisers who don’t. 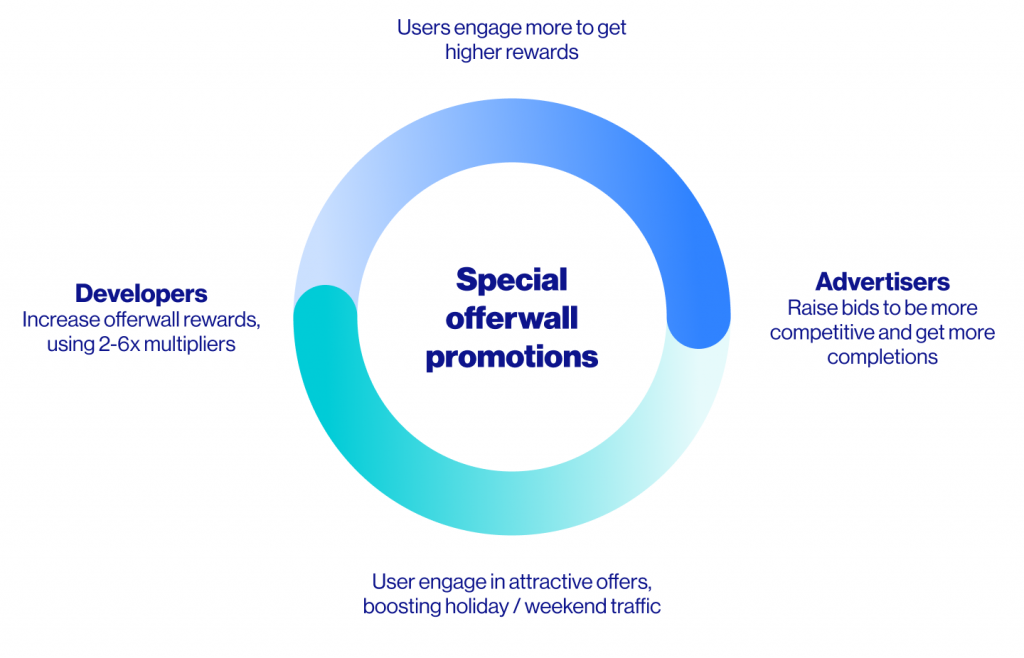 Here are some best practices to run a killer special promotion, which we’ve tested with some of the biggest mobile game developers in the world.

When to run special promotions

As a general rule, try running a special promotion at least once and up to twice a month. Less than once a month, you’ll miss out on potential revenue, but more than twice a month, you’ll risk flooding your in-game economy. When you run them, be sure to notify your ad network partner in advance, so they have enough time to encourage the biggest advertisers to focus their CPE efforts on your game. Here are a few times you can run the promotions:

US holidays are a good way to stay on track with your special offerwall promotions, since they usually land once a month or so - from President's Day weekend in February to Labor Day in September, plus Thanksgiving and Christmas. Running promotions during holidays enables you to capitalize on increased traffic: people play games more during breaks from school and work.

Each month, ironSource organizes cross-network special promotions so both developer and advertiser partners can enjoy maximum impact. Here’s the calendar for 2023, which you can bookmark:

How to increase engagement for special offerwall promotions

To generate revenue from special promotions, first you need users to engage. Here's a few ways to catch their attention and encourage engagement.

Notify your players with alerts

Your offerwall traffic drivers should always be visibly and strategically placed in your game. Special offers should follow the same logic: while the promotion will be automatically highlighted in the offerwall store, be sure to run pop-up ads in your game and push notifications outside of the game. Our data shows that these pop-ups can boost your player engagement rate by 190%.

Not only do notifications like these boost engagement from users already familiar with the offerwall ad unit, they’re also a great way to educate non-offerwall users about the benefits. Use the right messaging

To make sure the notifications work as best they can - users need to clearly understand just how much their rewards multiplied and that it’s only for a limited time. This way, players can understand how short-term this opportunity is, and are more motivated to claim their rewards immediately.

For example, to encourage users to act fast try adding a countdown. In Pixel Federation’s Train Station 2, for example, they include a specific timer and clearly state the special promotion - including both “2x” and “get twice the amount of free gems” in their pop-up.

Make sure to test different kinds of messages (more vs. less text, for example) and keep the one that generates the greatest uplift.

The more you put into your promotion, the more you can get out of it - if you offer a higher reward to your players, they’ll be more likely to engage.

That’s exactly what we found during a recent special promotion. During Thanksgiving, people were already spending extra on their phones, so developers enjoyed a small uplift in offerwall revenue - but by doubling offerwall rewards, their daily revenue jumped 70%. The impact was even larger when our developers tripled them - daily revenue skyrocketed 110%. 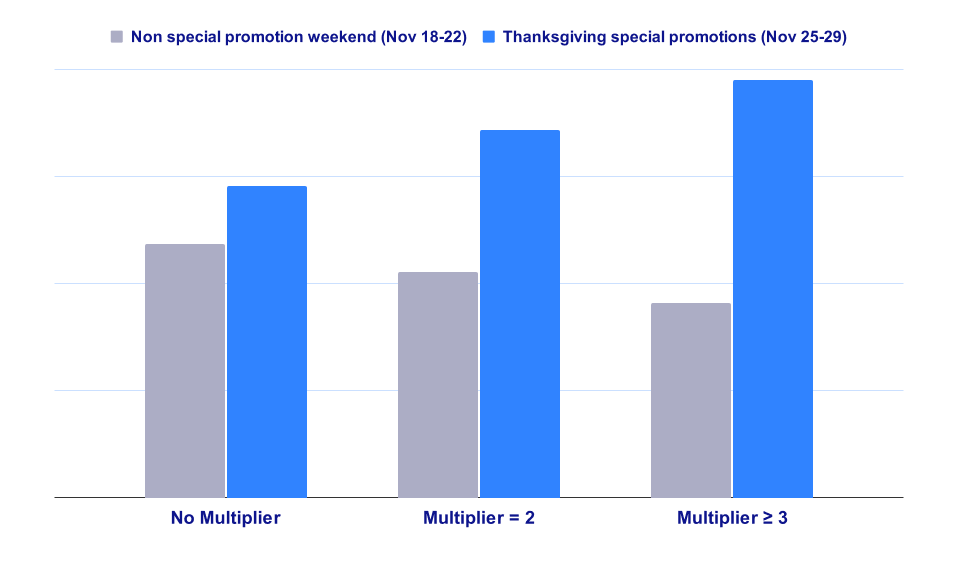 Be sure to measure the impact of the special promotions both during the promotion and after it expires. The time-consuming nature of completing offerwall events means that in addition to an initial spike in revenue, more revenue will be generated in the days or weeks following the end of the offer. That’s because even after the promotion ends, completions roll in along with revenue. The time period depends on the type of offers selected by the users: the deeper the events are, for example completing 10 levels of the advertiser’s game, the longer you should measure their impact.

Measuring this way allows you to more accurately evaluate the impact of your special offerwall promotion, and understand how aggressive you should be for the next promotion. For instance, if you’ve waited to measure its full impact and it turns out to have underperformed, you can push more notifications, or increase the credit multiplier for the next promotion.

The graph below shows the impact on revenue of a partners' offerwall special promotion. They achieved an initial spike while the promotion was live, and also saw a revenue uplift in the week after the promotion expired, due to more completions kicking in and an increase in the overall engagement rate with the offerwall.

ironSource’s team are experts in maximizing your game’s offerwall ad revenue. Here’s how to join the long list of partners working with us to level up their offerwall strategy:

If you don’t have offerwall set up on ironSource, get it here on iOS and Android.