Hyper-casual games: What are they & how do you monetize them? 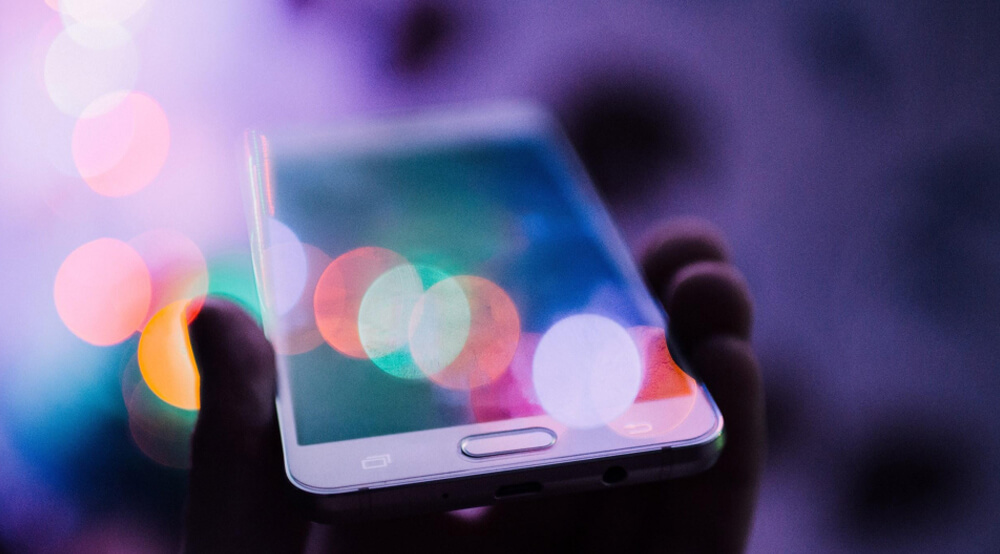 Since the App store surfaced 10 years ago, we have seen mid-core, casual, and (debatably) hard-core games take off in the mobile space, yet today a fourth category is dominating the app charts - hyper-casual.

In the past few years, hyper-casual games have seen unprecedented growth, and their momentum is only getting stronger.

So what exactly makes these games so successful? And where do we see hyper-casual going? Here’s our complete guide on the fast ascendance of hyper-casual games, and a look at how best to monetize them. What are hyper-casual games?

As the name suggests, hyper-casual games are lightweight games with simple mechanics that offer instant gameplay. Literally “tap to play.”

Because of their fundamental ‘simplicity,’ hyper-casual games are not only instantly playable but infinitely replayable, making them highly addictive and engaging. Think - how many hours have you spent playing Join Clash this week? (be honest).

The combination of simple mechanics with minimalistic UI provides a very accessible and incredibly engaging user experience, so no tutorial is necessary. Even more so than casual games, players can instantly jump into gameplay and get hooked on their goal.

Unlike other genres, which have very specific audiences, hyper-casual games are built for the masses. “If you can show your hyper-casual game in an ad, and people instantly understand what the game’s about, you’ve succeeded - that’s a hyper-casual game. It needs to appeal to a wide audience,” Paul Woodbridge, Director of Design at MAG Interactive shared on an episode of LevelUp.

The ascendance of hyper-casual games: Where did they come from?

Hyper-casual games aren’t exactly “new”, especially in the sense that they are, in some ways, a revival of 70s arcade games. However, they only recently grew into the sensation they are today, grabbing 10 out of the top 15 spots in the top downloaded charts, versus when they held a ‘mere’ 3 spots on the top charts just a few years ago.

The ascendance of hyper-casual games can be credited to three main factors: that hyper-casual remains a global phenomenon, that IPM for hyper-casual grew 70% in the last year (ultimately leading to more installs), and that there are simply more hyper-casual developers on the scene. In fact, the low barriers to entry has helped several previously unknown developers make it to the top of the charts.

“As casual games implement deeper, mid-core features they become more engaging, but also more complicated. This, in turn, opens up a segment for hyper-casual games to dominate - games that are easy to start and fun to play,” said Deconstructor of Fun founder and Rovio's Director of Product Management, Mishka Katkoff in his interview with ironSource LevelUp.

Although hyper-casual games are dominating the download charts, most hyper-casual games still can’t compete with Clash of Clans for highest grossing games - and nor do they need to. While these mid-core and casual games make the bulk of their revenue from IAPs, hyper-casual games mainly monetize through ads, a business model which is sustainable for them due to the huge scale they see in terms of downloads. “While the in-app revenue of their games is relatively low, the scale is great, and through video ads and cross-promotional work, the companies are able to operate a massive volume of business,” said Katkoff.

With such great scale, developers creating multiple hyper-casual titles don’t necessarily need to rely on revenue from IAPs, and for this reason some hyper-casual games don’t even bother to include them.

“The business model is different. You’re not interested in building this long-term relationship with a player where they feel the need to spend money. You have a much more short-term relationship, where you want them to quickly die and watch an ad to continue,” explained Tom Kinniburgh, founder at Mobile Free to Play said on LevelUp. 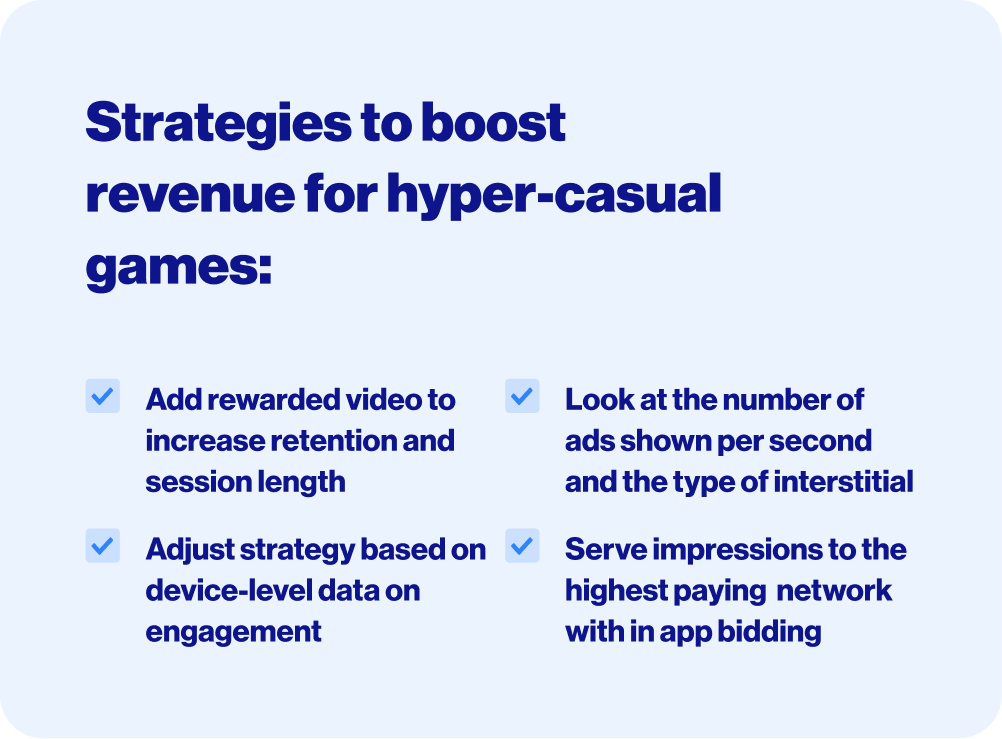 As we’ve pointed out, due to their relatively unsophisticated in-app economies, hyper-casual games rely on ads as their primary form of monetization, so picking the correct ad units and monetization technologies is hyper important. Both are key for reaching hyper-casual’s ultimate monetization goal - which is to increase ARPU.

Beyond evaluating specific ad units, developers should consider factors like session length and number of sessions per day when designing their ad implementation. Both elements present opportunities to serve more impressions to users, which in turn drives more revenue. Some top hyper-casual titles with great monetization strategies include Supersonic's Join Clash and Samurai Flash.

Below are few different tactics, ideas, and strategies to boost revenue for hyper-casual games.

When it comes to monetizing users, in many ways rewarded video is the most rewarding ad format (see what we did there?). In addition to generating more revenue for developers, incorporating rewarded video also increases retention and session length (unlike interstitial and banner ads, which can in some cases have the opposite effect).

While it may be more challenging to incorporate rewarded video in hyper-casual games lacking strong virtual economies, it’s well worth your while to think about creative ways to incorporate the ad format. Developers looking to incorporate more rewarded video can try adding different layers to their games, or providing various valuable rewards such as gems, extra time, extra lives, etc. in order to drive more engagement. A 40% plus engagement rate, and 4 impressions per user per day are good goals to aim for.

(For a more in-depth look at which metrics are important for your in-app ad monetization strategy, you can check out our presentation on that very topic on Slideshare.)

Even when developers have optimized their rewarded video strategy, they may still see that more than half of their users don’t engage with the ad unit (and even fewer make purchases in the virtual store). This makes interstitials and banner ads a hyper-casual game developers best friend, helping them successfully monetize all their users.

For interstitials there are two main factors to look at. The first is the number of ads shown per second, and the second is the type of interstitial - static, video, playable. It’s also critical to decide if the ad will have a skip button, and if so after how many seconds will it appear? While taking a more aggressive approach - (more impressions per session, including playable and video ads, a ‘skip ad’ button that pops up only after 5 seconds) - will generate higher ARPDAU, it may also simultaneously hurt retention and session length and alienate your users - so approach with caution.

Ultimately it’s all about finding the ‘sweet spot’ that balances user experience and monetization to maximize LTV and ARPU. The best way to find the setup that generates the highest LTV is by A/B testing. For a benchmark, we recommend aiming for 3 impressions per session.

For developers looking to implement an even more sophisticated monetization strategy, it’s also worthwhile looking at building tailored ad implementations for different segments. For example, for users that engage with rewarded video and make purchases in the store, taking a softer - i.e. less aggressive - approach to ads shown makes more sense, since these are high-engagement, likely also high-retention users. For users that generate zero revenue through IAPs or rewarded ads, taking a more aggressive approach can work in order to yield more hyper-casual game revenue.

While in hyper-casual games, the vast majority of hyper-casual revenue comes from ads, getting a look at device-level data on ad revenue is just as important as getting it for IAP-focused games. The more important a revenue stream ad monetization becomes, the more important this information will be for both user acquisition and overall monetization activities. In a way, ads are actually very similar to IAPs, in the sense that just as you have ‘whales’ who spend a lot in-app, you can also have ‘ad whales’ - i.e. users who generate significant hyper-casual revenue from engaging heavily with ads. As such, it’s important for app developers to adjust their implementation and strategies based on device-level data on ad engagement and revenue. For example, ironSource’s impression level revenue solution enables developers to see which user segments are not engaging with rewarded video at all, and can therefore be shown more interstitial and banner ads.

In addition to implementing the ad units, the monetization stack that powers those ad units is just as important for hyper-casual developers to focus their monetization strategy on. By functioning as an auction among ad networks, in-app bidding, which in the past year has gained significant traction, lets app developers effectively automate monetization while still garnering the highest value for each impression.

ironSource’s in-app bidding solution, for example, is the first on the market to grant developers immediate access to top in-app bidding networks like Facebook Audience Network.

The best and top hyper-casual games of 2021

According to Sensor Tower, these are the top hyper-casual games worldwide according to downloads in 2021.

The future of the hyper-casual market

As Katkoff points out, “hyper-casual and ad monetization are proving to go hand in hand” - changing the landscape of the monetization game. With so many hyper-casual titles popping up every week, developers may have to begin implementing deeper features in order to stand out from their competition, and it will be interesting to see how they do so within the category’s natural parameters. Hyper-casual games have opened up a realm of new possibilities in the market and it will be exciting to track the category’s progress over the next year.

Listen to the first episode of our hyper-casual podcast mini-series. Want to learn what goes into making the world’s most popular games? Subscribe to LevelUp to never miss an update. 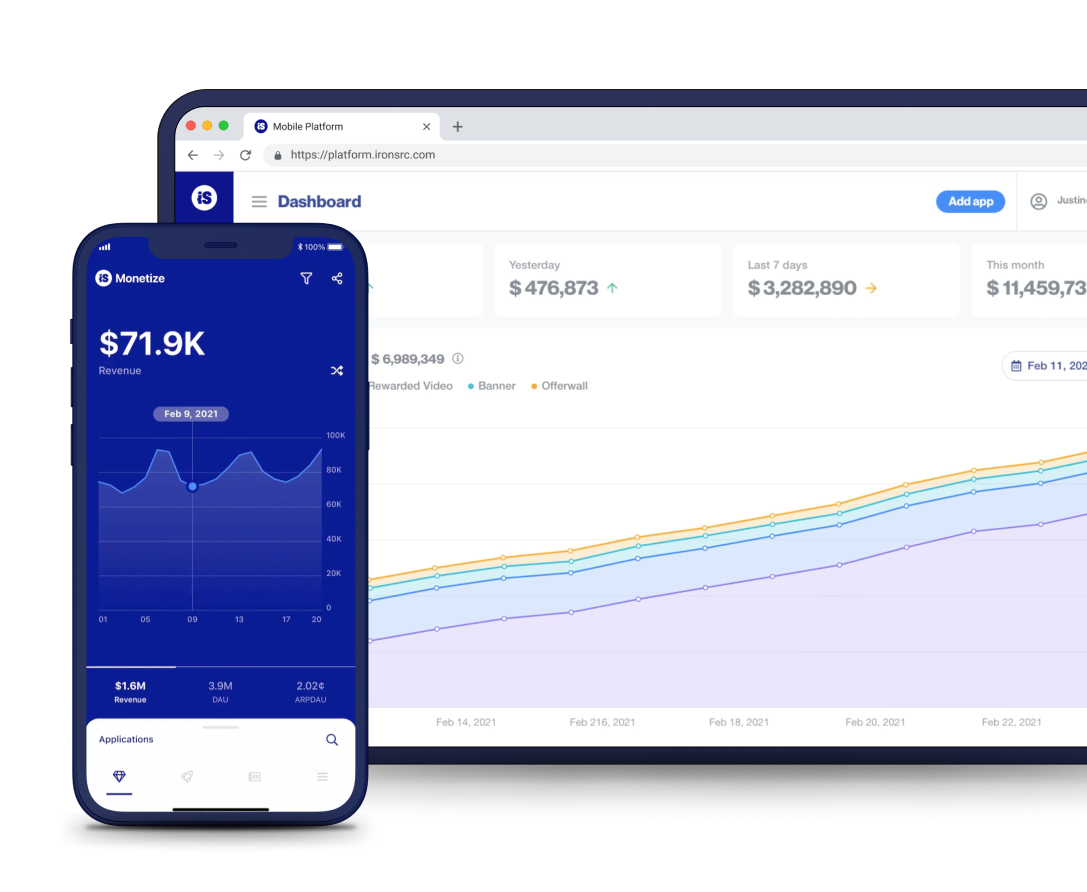