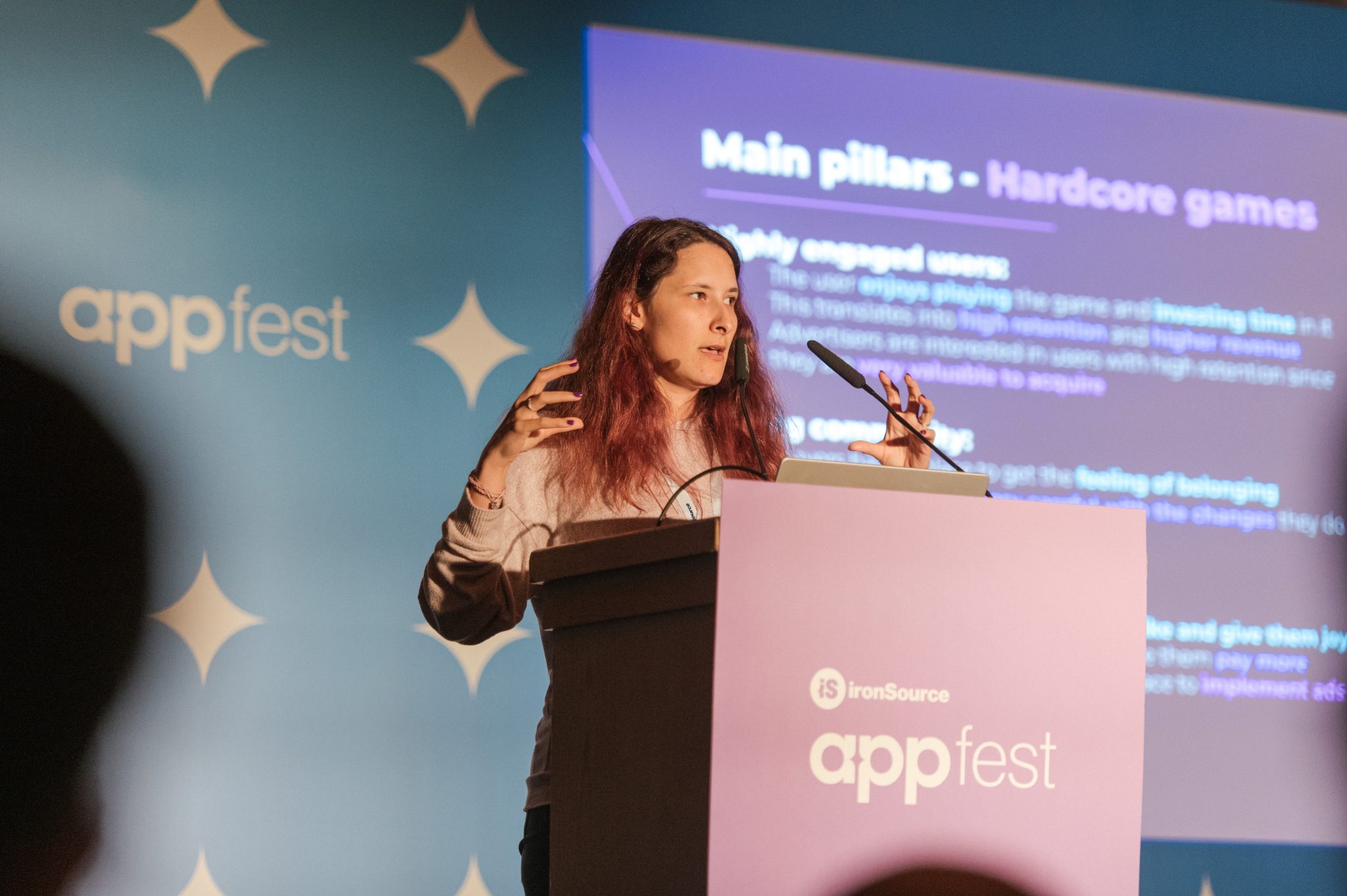 She kicked off her presentation with the main challenge facing free-to-play games: less than 3% of gamers actually pay for in-app purchases. But, Noelia explains, just because 97% of users aren’t paying, doesn’t mean you can’t monetize them. 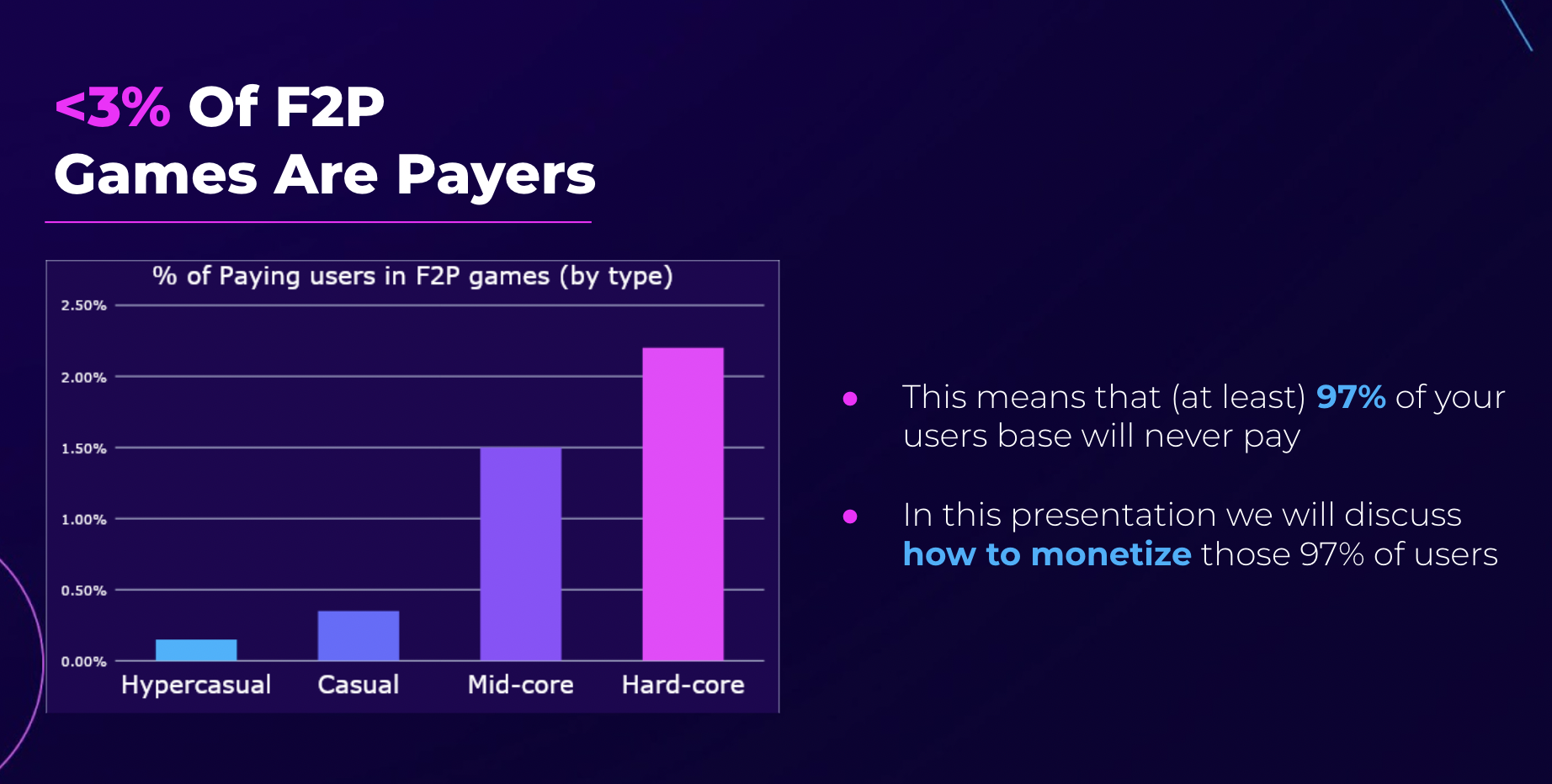 The pillars of monetization

As Noelia explains, many hardcore and midcore game developers are concerned that ad monetization may negatively affect retention and/or revenue. She’s heard them say that:

But, according to Noelia, none of these concerns are true - in fact, it just means these developers aren’t implementing their ad placements the right way (or, as she puts it, “you aren’t doing your job well enough!”).

The roadmap of ad implementation

So, how can you monetize with ads in a way that promotes revenue growth and engagement? Follow a roadmap, implementing placements throughout the development lifecycle, from prototyping, soft launch, global launch, and finally live ops.

Many developers think the prototyping stage of the game is too early to begin thinking about ad monetization, and would rather focus on other in-game features - but in fact, Noelia says it's critical to begin here.

From here, conceptualize putting these placements into your game and how much revenue they could bring. Understanding each ad placement’s revenue potential will help you prioritize which placements to focus on first. By getting started this early, you can also encourage the product team to prioritize placements and align on your exact strategy.

Noelia emphasizes the importance of conceptualization, or mentally preparing yourself and your team for an ad placement, even if there’s no space for it in that moment. You can start preparing by asking yourself: where exactly a placement should go, what it looks like, and what else it needs, like a tutorial.

After prototyping, it’s time for the soft launch, or the testing phase. Noelia broke this phase down into three parts: integration, goal setting, and testing.

First comes your ad placements. This starts with integrating ad networks - whichever ones you find perform best - and a mediation platform. The best ads for hardcore games are rewarded videos and offerwalls.

In the next stage, you want to always consider your goals - like fill rate, boosting LTV, and finding the balance between in-app ads and in-app purchases that maximizes revenue. As she explains, there’s no need to push for CPMs, or make a complex waterfall because soft launches often run in countries that tend to have lower impressions. That’s why it’s important to focus on fill rate, so you understand your engagement and impressions per day, and that your fill rate is good.

As for tests, Noelia suggests conducting multiple tests for your ads - it’s important to test the most challenging ads, or the ones that might cannibalize in-app purchases, affect retention, etc. As you determine your game economy, this is also the time to test the ideal reward amount you want to give - increasing or decreasing it accordingly. Even after launch, you should continually be testing and optimizing to ensure the highest performance.

Next comes the global launch - time to finally monitor how your in-app ads are performing. Noelia recommends viewing the metrics of all your ad placements, like engagement and ads per DAU, on one page so you can see which perform best. The ad engagement rate for hardcore games, according to Noelia, hovers around 60%, ads per DAU ranges from 0-3, and ad revenue can get up to 15%. The goal is to have a 95% fill rate, to ensure there’s the highest opportunity possible to serve impressions.

To drive home her point, Noelia shared successful examples of placement strategies from her games, like Warhammer: Chaos and Conquest. For example, they offer a welcome package of hard currency every time a user logs on, which boosts players to get started in the game and keep playing. To get non-paying hardcore users to experiment with your game’s ads, she also recommends using offerwall ads - which also helped increase Warhammer’s engagement rate. 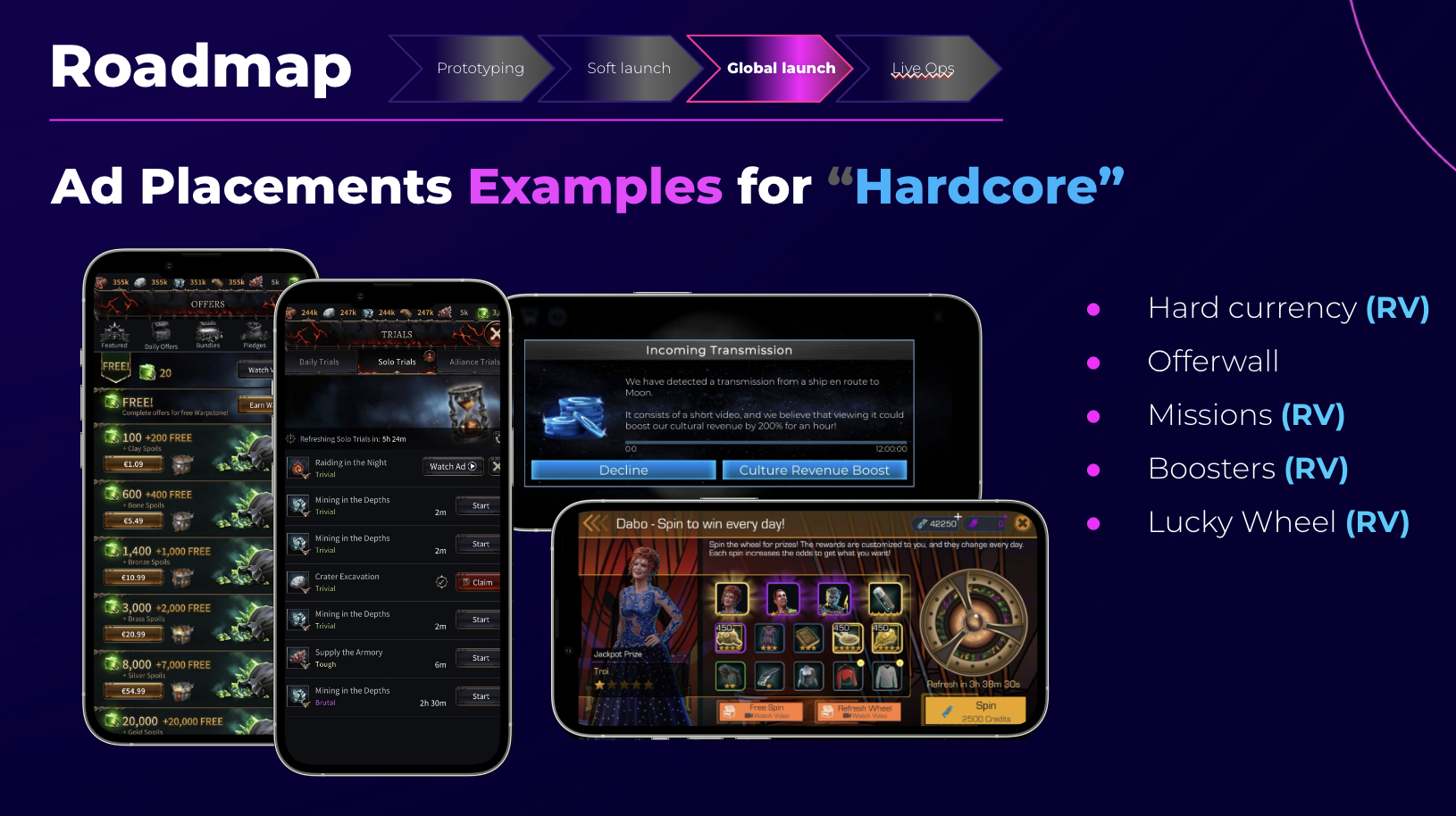 Finally comes the live ops, or the post launch period, where you should be adjusting your ad placements to optimize performance. Before making any adjustments it’s important to be mindful that these changes don’t impact users’ ability to engage with ads.

The live ops period can even be an opportunity to increase revenue. For example, if you establish a leaderboard to incentivize non-paying players, you can use ad placements as “tickets” for getting in. Due to increased competition with non-paying users, paying users can also be motivated to invest more to stay on top.

Ultimately, ads are a major asset to monetizing your midcore or hardcore game, but placement strategies can only succeed with the right amount of monitoring and optimizing - even from the initial stages of your game’s development.

Measures the degree of user interaction within an app.

A pricing model referring to the cost of 1,000 impressions.