How to level up your rewarded video monetization 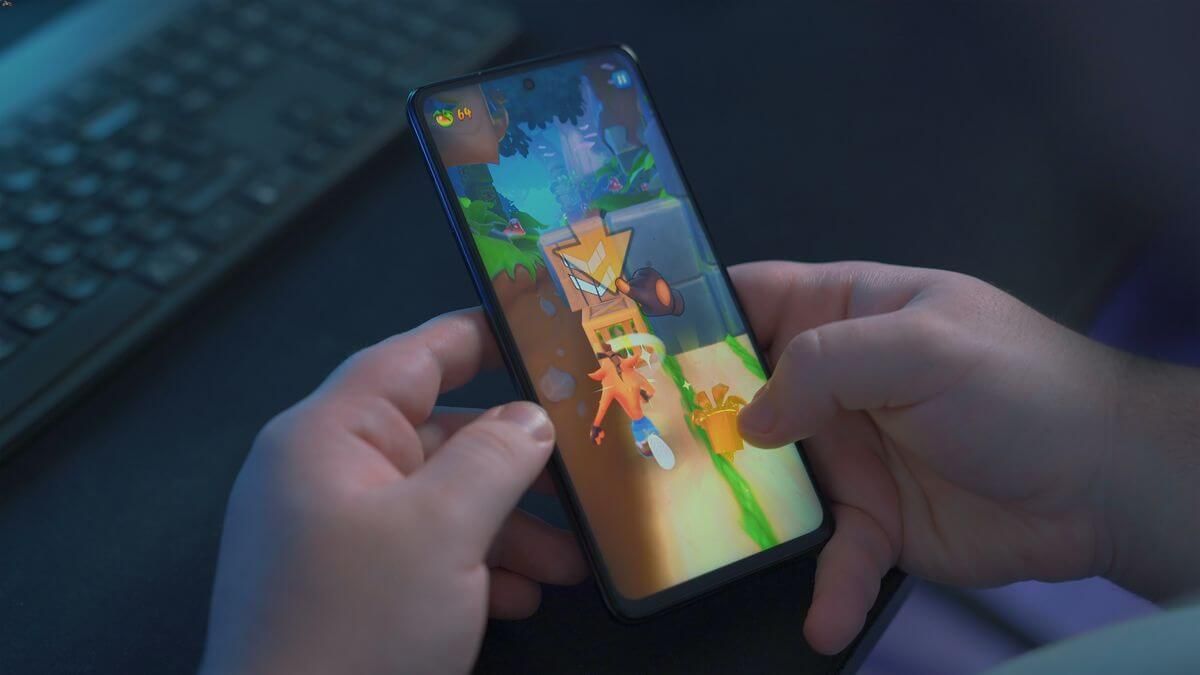 Rewarded videos are the king of ads - which when implemented smartly can be essential parts of a mobile game’s core loop. For users, rewarded videos provide access to a variety of rewards that offer in-game currency or progression boosts - often at times when they’re very much needed. Because they’re opt-in, meaning the user chooses to interact with the ad, the user experience is typically a very positive one. As a result, 32% of gamers see rewarded video as being twice as useful as all other advertising formats, according to Marc Milowski, Strategic Partner Manager at Facebook Audience Network.

For game developers, rewarded videos serve as a meaningful revenue stream that also increases retention rates, by enabling users to progress faster and enjoy premium content for free. Rewarded videos are so beneficial to everyone involved that 79% of developers running both in-app ads and in-app purchases said rewarded video was their most successful monetization format.

However, succeeding with rewarded video requires a well-thought out plan and partnering with the right mediation platform - one that has the strongest tech tools to support a high growth rewarded video strategy. Below, we share our best practices to ensure you maximize revenue and keep your users as happy as possible. 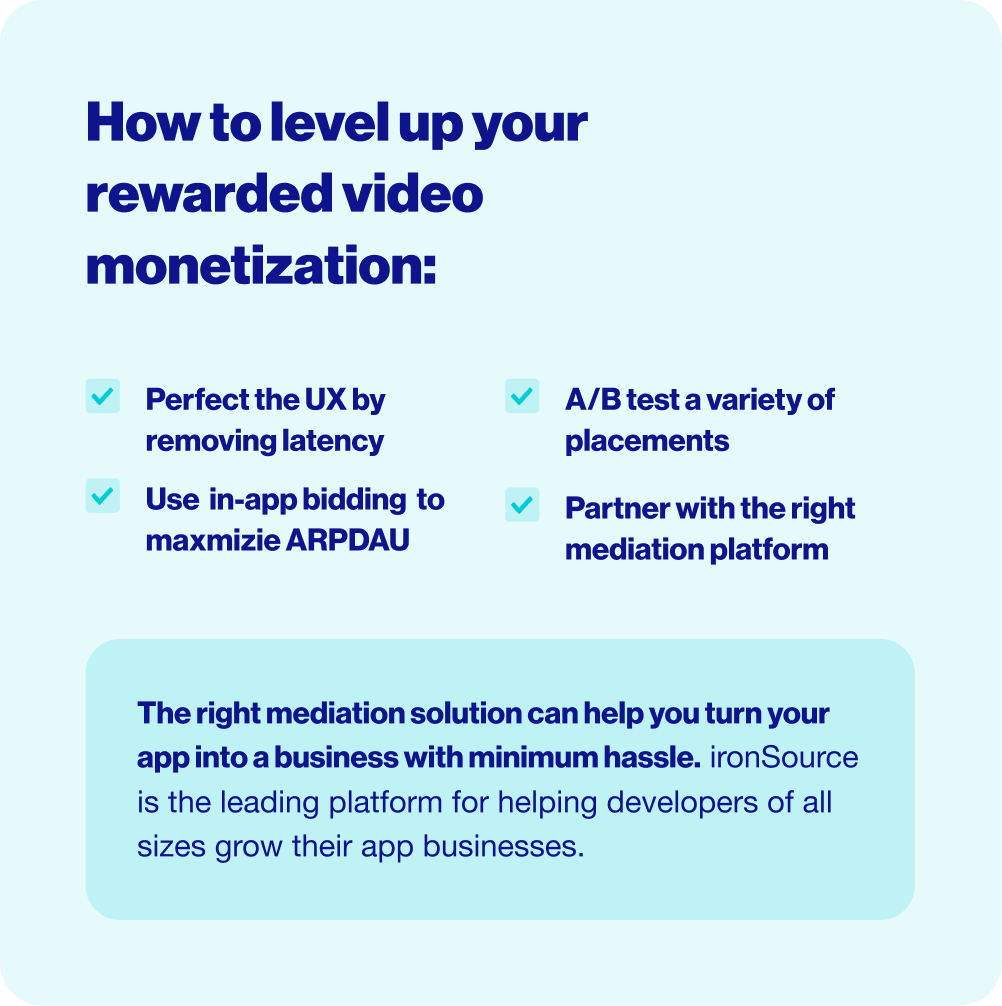 1. Perfect the UX by removing latency

The positive experience rewarded video creates for users strengthens game retention and lays the foundation for strong engagement rate and usage rates - and in turn ARPDAU.

Preserving this positive user experience is key to ensuring a successful rewarded video strategy over the long-term, and latency is a key factor in dictating that UX - in other words, whether or not the ad is served instantly after a user clicks on the traffic driver or button for the ad, or if there’s a delay in filling the ad space that causes the user to stare at a blank screen.

Developers generally choose from three options when managing latency’s impact on the user experience. The first approach is to only show users a rewarded video traffic driver when there’s an ad ready to display. The second option is to always display the traffic driver, and if the ad inventory isn’t filled, users are left staring at a blank screen until they exit out. The third option is the same as the second, just with a slightly better user experience - if an ad isn’t available, a pop up will appear that states this.

The drawbacks of these options are clear, harming ARPDAU, the user experience, or both. That’s why in recent years, developers have dedicated considerable time to optimizing their monetization strategy - typically through hybrid bidding and waterfall setups - to find the balance between sophisticated auctions and reduced latency. However, even the most optimized setup can’t deliver zero latency.

That’s why you need to find a mediation platform that has dedicated technology to remove latency entirely. ironSource, for instance, developed an industry-first mechanism known as progressive loading, which ensures that there is always a rewarded video ad available, with no waiting.

Not only does this ensure a perfect user experience by enabling users to watch multiple rewarded videos without a delay in between, it also means developers don’t need to deal with the time-consuming burden of latency management.

Since progressive loading was implemented in ironSource’s mediation, we've seen revenue shoot up between 3% to 20% per app. This range is mainly affected by genre - the deeper the game, such as those in the casual or midcore categories, the more significant the impact of progressive loading. That's because these games by design provide more opportunities for users to watch rewarded videos. In addition, games in these categories have more complex in-game economies, which the ads' rewards provide real value to. 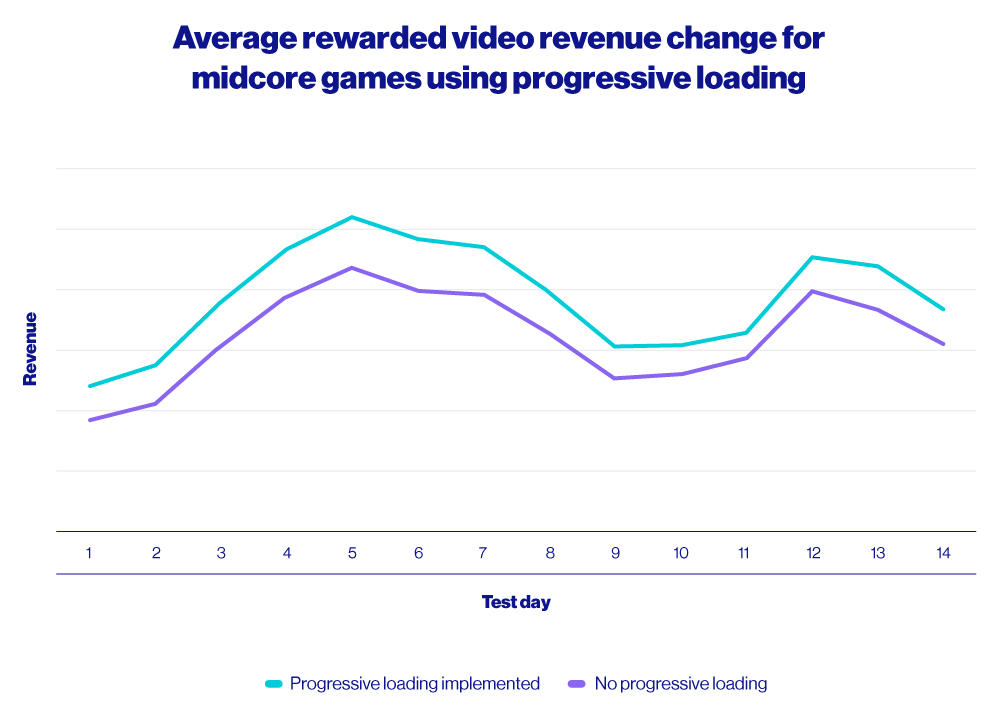 To maximize usage rates of your rewarded video ads and leverage the power of progressive loading, we recommend using stacked multiplier rewards for a strip of rewarded videos. For example, the user watches one video and unlocks a "double income for 4 hours" reward. If they watch another video in the strip, 4 more hours will be added to the boost. Typically, developers add a limit to this cycle, for example up to 12 hours worth of boosts.

Another option is encouraging users to watch several rewarded videos in a row to get a mystery box or a specific reward. We’ve also seen developers offer users the ability to open a treasure chest by watching a rewarded video, and as soon as they open it, offer them the possibility of doubling their chest loot by watching another rewarded video.

That’s not all - a user may decide to open up a standard rewarded video placement on the game’s home screen multiple times in a row - especially in idle games that revolve around currency accumulation or scaling production. Each rewarded video ad could offer a multiplier that doubles or triples the earnings from the previous ad. Whatever the scenario and session depth, users can experience multiple ads with zero latency between them thanks to progressive loading.

Make sure you A/B test different types of rewards and see which ones have the biggest impact on engagement and usage rates for your rewarded video ad placements. Maximizing the value you provide your players and encouraging them to watch multiple ads should be your focus - progressive loading technology will take care of the zero latency part for these multiple ads to ensure a perfect user experience.

The right in-app bidding partner will help you get the most out of your rewarded video ad placement strategy by maximizing your ARPDAU.

There are four ways it does this - first, bidding strengthens competition for every impression, which means ad networks will bid higher than they usually would in order to outbid their competitors and fill your rewarded video inventory with an ad.

Second, because all ad networks have the opportunity to bid to fill your ad request - not just the networks at the top of the waterfall - you never leave potential money on the table for your rewarded video placements.

Third, with in-app bidding, bids for impressions are received in real time, which is more accurate than the flat eCPM or historical data used in waterfalls. This ensures you, as the developer, never undersell your impressions.

Finally, sometimes ad networks are willing to pay top dollar for specific ad impressions -  we’ve seen CPMs exceed $200 in some cases. You might not have accounted for such a high bid in your waterfall instances setup - if you’ve set your top instance at $50, you’d miss out on this potential revenue. In-app bidding ensures you’re always able to maximize your earnings thanks to its auction-like methodology.

3. A/B test a variety of placements

One of the best attributes of rewarded video ads is their potential to be implemented in very creative and innovative ways that complement the game experience. This brings us to the world of placement strategy.

There’s two reasons why your placement strategy is key.  First, with good placements your rewarded videos will be highly visible and accessible: this will maximize engagement and usage rates, and in turn meet your ad revenue goals. Second, a good placement strategy is also key to providing the best user experience. It’s not enough to make your rewarded video ads just visible - you need to make them visible in the right situations, when the rewards will be most valuable to users.

That’s why adding different types of rewarded videos that offer users progression or currency-based rewards at multiple spots throughout your game is recommended. Below we unpack some of the most popular placements we’ve come across.

Extra currency in the home screen or in-game shop is a common type of rewarded video placement. The traffic driver in the home screen can be left there for a limited amount of time or indefinitely, giving users the option to earn rewards whenever they need - just keep a close eye on IAP cannibalization.

When users are in the game’s store, they’re showing some kind of intent to access premium content. Most users won’t be willing to spend real money, so giving them the option to watch an ad in return for earning gems -  which can then be used to unlock premium items - can be very effective.

When a user fails a level, you can use a progression-based reward - like an extra life - that lets them keep playing in exchange for watching a rewarded video. In some games, developers let users automatically gain an extra life without watching an ad - but they have to wait a minute or more to receive it. As a time-saving alternative, users can open the rewarded video ad in order to gain the extra life and resume their play session.

Double or triple rewards at the end of a level

A popular rewarded video placement is to offer a multiplier at the end of a level. Here, the rewarded videos can provide monetary or progression-based value to users. What does that mean exactly? When a user completes a level and earns a prize, you can offer them the opportunity to double or triple its value by watching a rewarded video ad.

There are various ways to use chest boxes with rewarded videos: the traffic driver for the mystery box could appear only after specific achievements, like collecting a certain number of bombs; it could appear on a timer basis, every few hours; or it could appear based on progress, such as every two or three levels.

Daily bonuses are a type of rewarded video placement that developers use as a retention boosting mechanism. The placement can be used in different ways: for example, you could give users a daily bonus for free and use the rewarded video to multiply the offer, or you could provide rewarded videos to users as a way to unlock daily rewards that ordinarily cost real money.

An optimized rewarded video strategy can be the difference between a game business struggling to make a profit and one meeting all its KPIs. Progressive loading is a game-changer that unlocks what all developers strive for: a perfect user experience, no time-consuming latency management, and increased ad revenue. In an industry where the finest of margins can make all the difference, this winning trifecta helps provide a competitive advantage to scale game growth.

The combination of leveraging the power of progressive loading technology - available only on ironSource’s mediation - with in-app bidding and a mix of classic and innovative ad placements will lay the foundation for success. Specifically, these best practices will keep users happy and engaged in your game, keep them coming back to your rewarded video placements, and as a result, driving up your ARPDAU over the long-run.