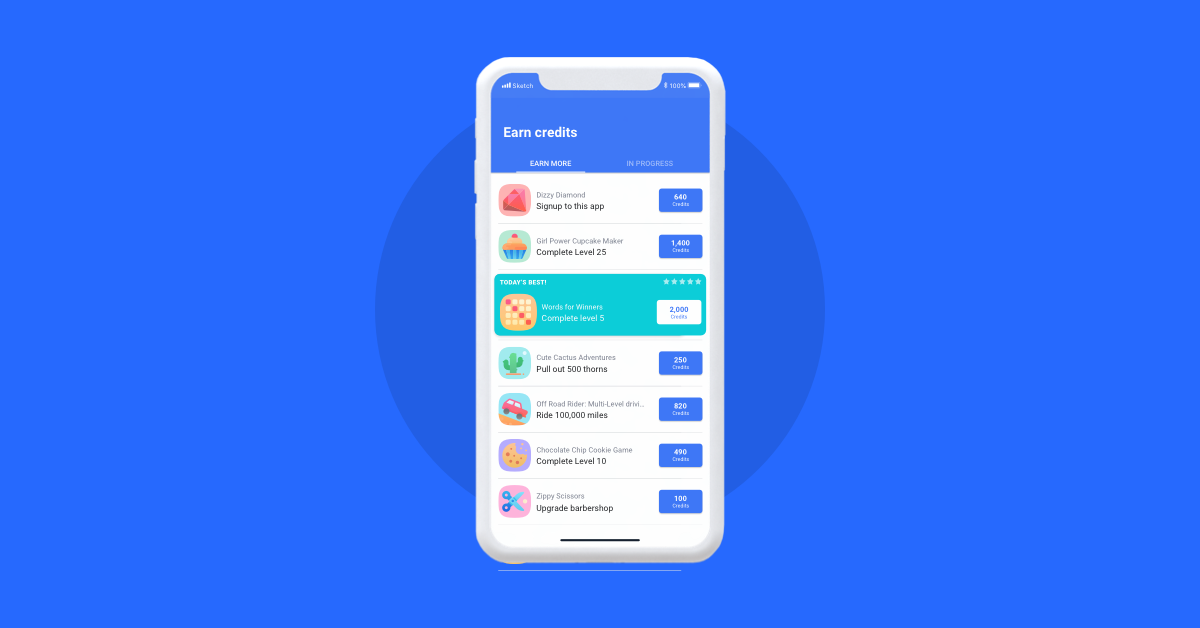 Offerwall ads are an important part of any monetization manager’s ad unit strategy, and when implemented effectively, they can significantly boost your game’s ad revenue. Offerwalls are mini-stores in which users can complete tasks set by advertisers, such as downloading a new game and completing a certain level, in order to receive currency in the game they were playing initially. As users commit to a time-consuming task, advertisers are willing to pay lucrative payouts, which translate into very high eCPMs for developers.

In addition to increasing revenue, offerwall ads also boost player engagement by providing valuable rewards, in turn catalyzing a retention loop. The increase in user retention due to the “taste” of the value of hard currency in the game can even lead to non-paying users converting to paying users, showing the potential impact of offerwalls not just in terms of ad revenue but also your game’s wider monetization. Below, we share our best practices for maximizing revenue generated by your offerwall placements.

Special offerwall promotions are a proven way to increase engagement, retention, and overall revenue for app developers. The promotions used typically range from 2x to 10x the standard rewards offered to users, for a limited time period.

By offering higher value rewards, developers give their users a bigger incentive to engage with the offerwall and complete offerwall tasks, which leads to higher ad revenue. Not only that, they can lead to a double-digit growth in IAPs, by giving users a taste of in-game boosts and leading to higher all around engagement.

A form of live ops, special offerwall promotions should be implemented at least once a month, ideally over weekends and holidays like Christmas and Thanksgiving to capitalize on high traffic. Use segmentation (more on that below) to ensure you’re serving offerwall promotions to the most relevant users.

It’s common practice to insert an alert inside the offerwall store itself about the special promotion in order to make sure users are aware it’s happening. But also be sure to run pop-up ads in your game and push notifications outside of the game. Not only do notifications like these boost engagement from users already familiar with the offerwall, they also are a great way to educate non-offerwall users about the benefits of an offerwall. Make these compelling by clearly stating what users will receive: free hard currency and higher rewards for a limited time only. Your game will enjoy a spike in traffic if you do.

Setting the right exchange rate is all about finding the balance between maximizing your offerwall revenue and minimizing your IAP cannibalization. The exchange rate refers to how many virtual items your users receive for one dollar of revenue you generate. We encourage developers to use their IAP exchange rate as a benchmark for their offerwall exchange rate. For example, if a user pays $1 for 3 gems in your store, make it the same on your offerwall. You can even offer more gems for an offer worth $1 on your offerwall, as unlike the app stores, the offerwall doesn’t take a 30% cut - leaving you with more revenue.

Crucially, you need to A/B test to find the optimal ratio for your game. Setting high exchange rates for the offerwall generally means higher engagement and completion rates, because users have more incentive to complete the offer. However, if you offer too much virtual currency for completing an offerwall task, you risk damaging your in-app purchases. Find that sweet spot through frequent A/B testing.

You can also set custom exchange rates to appeal to users of different age groups. Remember that the relative value of your game’s virtual currency decreases as players progress. In other words 100 coins will be of less value to a user on level 30 than a user just starting out. So, to ensure that the rewards stay meaningful throughout the lifecycle of the game, make sure to scale your offerings in line with the level users have reached or the days they've spent playing.

The placement of the traffic driver, or call-to-action button, is critical to encourage maximum engagement and conversion of your game's offerwall. The key is making it accessible, visible, and easy to spot. That way, even if users don't know what the offerwall is, they still have access. We recommend placing it on the home screen, in your in-app store, in the game’s stats bar, and at natural breaks in gameplay in which the user lacks currency to complete an action. Take a look at the image above of the store in Mail.Ru's game Hustle Castle - the offerwall traffic driver is on the left of the screen, and clearly shows users the value exchange of engaging.

Your users are not homogenous, and treating them so will limit the effectiveness of your offerwall performance. Set different levels of rewards for different user groups, like age and level reached. For example, some developers choose not to show offerwalls to users at the first open, and prefer to wait a set amount of sessions until they can better predict that user’s behavior.

We also recommend segmenting users according to country and paying vs. non-paying. For instance, for users in tier three countries, who typically have low in-game purchases rates, consider being more aggressive with your offerwall ads by showing them at first open. With these non-paying users, IAP cannibalization is not an issue, so focus on maximizing their engagement with your offerwalls by serving them more frequently and increasing the exchange rate. Doing so will provide a customized ad experience designed to balance revenue and user experience for that particular group.

Don’t have the offerwall integrated yet? Click here to get started with ironSource now.