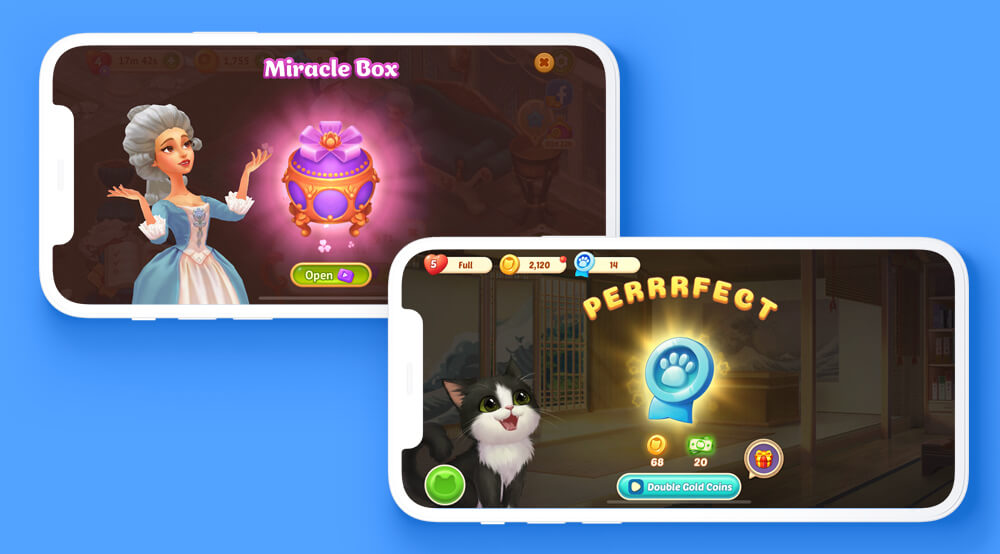 Meta match-3 games are a subcategory of casual games that combine traditional match-3 puzzle mechanics (think Candy Crush) with meta layers, such as quests, collections, and mini-games. These additional layers create a series of linked cascading goals, in which users are motivated to accumulate currency and complete meta missions.

Rewarded videos are an effective way to cater to and enhance these motivations, and when implemented smartly can increase session length, retention rates, and ARPDAU.

But how do you unlock this potential? Below, Anna Popereko, ironSource's Game Design Consultant, shares examples of successful rewarded video implementations from meta match-3 games to help inspire you - whether you’re working in this genre or not. 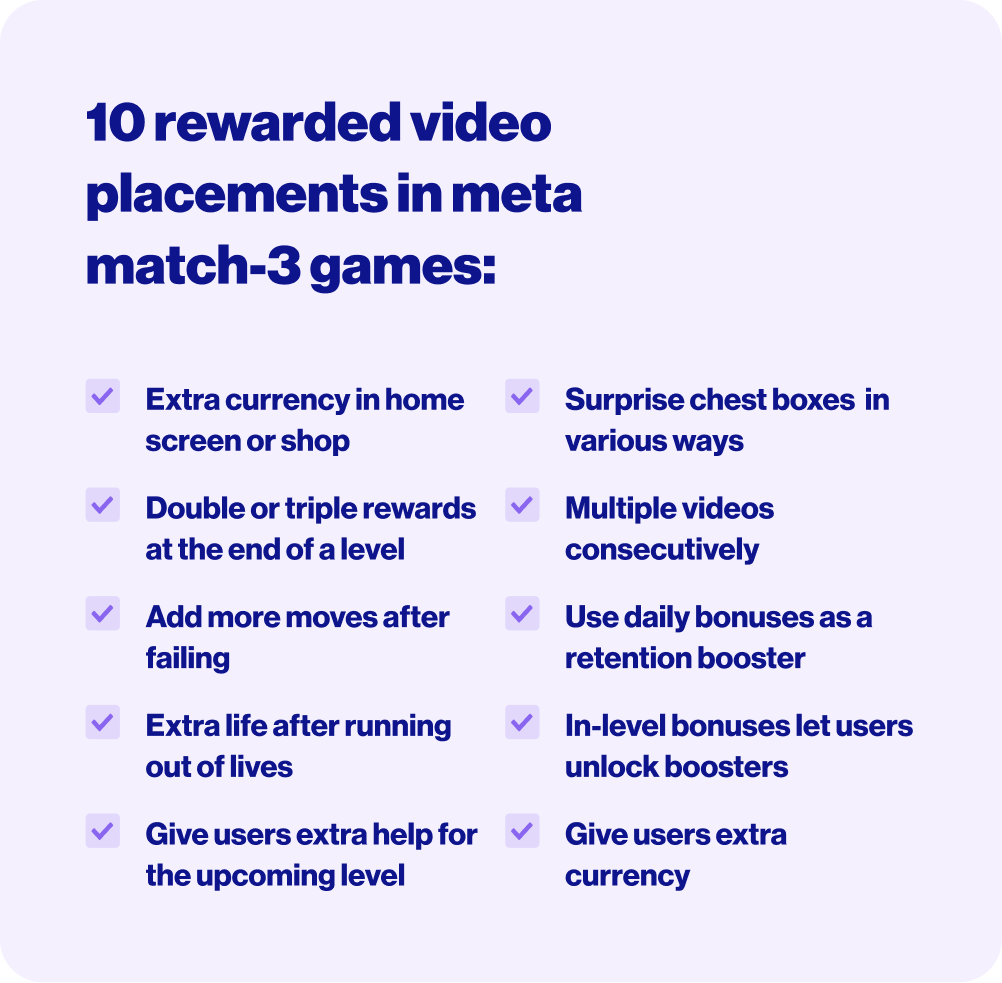 The importance of a good placement strategy

With good placements your rewarded videos will be highly visible and accessible. This will enable you to maximize engagement and usage rates, and in turn meet your ad revenue goals. Making rewarded videos available in the most valuable moments to the user is key to providing the best user experience.

In terms of the rewards you offer users with each rewarded video, there are various possibilities. You might offer the ability to unlock in-game content and currencies, progression rewards, surprises, or even bonus levels. In order to appeal to a larger audience, it’s important to offer multiple types of rewards.

Extra currency in the home screen or in-game shop is one of the most common types of rewarded video placements for meta match-3 games.

Users in the game’s store show intent to access premium content. Most users won’t be willing to spend real money, so giving them the option to watch an ad in return for earning gems -  which can then be used to unlock premium items - can be valuable to them and increase usage rates and ARPDAU for you. In the example below from Kitten Match’s in-game store, we see the rewarded video traffic driver is surrounded by the IAP offerings and is blue, helping it stand out from the green buttons around it.

In Property Brothers, an ad placement for extra currency sits on the home screen and offers users 10 gems in return for watching an ad. Being specific with the number often helps drive up usage rates, because users know exactly what they’re getting in return.

2. Double or triple rewards at the end of a level

End-of-level rewarded video placements can provide progression-based or monetary value to users. What does that mean exactly?

When a user completes a level and earns a prize, you can offer them the opportunity to double or triple its value by watching a rewarded video ad. That’s what the publisher Special did in its meta match-3 title, Kitten Match. This placement seeks to tap into the positive and rewarding feeling the user has after completing a level.

If users don’t pass the level in the amount of moves the game gives them, consider placing a rewarded video that gives them more moves. Typically we see 3 to 5 moves being offered for watching the ad - we’ve also seen developers use a wheel of fortune which contains different quantities of additional moves.

To avoid IAP cannibalization, make sure you offer less moves through rewarded video than what you offer with in-app purchases. For instance, if you offer 5 moves for $1.99 in the store, give up to 3 as a reward for watching your ads. You should also limit the number of “Add moves” rewarded video placements users can watch per session - if this is unlimited, they’ll have no reason to pay for extra moves in the store.

The example below is from Ohana Island - note how the rewarded video traffic driver stands out in blue.

4. Extra life after running out of lives

Alternatively, when a user runs out of lives, you can use a progression-based reward - like an extra life - that lets them keep playing in exchange for watching a rewarded video. In the example below, from Kitten Match, the user is able to unlock a free life after failing the level instead of waiting for their life to automatically restore. In this case, the user has double the incentive to save time and gain a life through watching the rewarded video.

To increase the engagement rates for these placements,  add a countdown to give users a sense of FOMO if they don’t engage. As always, you can test this out through A/B testing.

You can also use more unpredictable end-of-level placements, for instance offering users a chance to spin a wheel full of prizes, or even opening a simple “surprise box”.

5. Start with a bonus

This ad placement gives users extra help for the upcoming level. It can be used in different ways: the placement could offer a random power up, a specific power up, or additional moves.

Take the example below, from Property Brothers: users can click “Play” to start the level, or they can click “Play” to start the level with 2 extra moves - which sounds more appealing. Note how the game shows the user the goal of the upcoming level, giving the user a sense of challenge - a feeling that perfectly aligns with the desire to gain extra moves via the rewarded video.

There are various ways to use chest boxes with rewarded videos: the traffic driver for the mystery box could appear only after specific achievements, like collecting a certain number of bombs; it could appear on a timer basis, every few hours; or it could appear based on progress, such as every two or three levels. Alternatively, you can enable users to unlock a chest box immediately by watching a rewarded video placed on the homescreen.

To increase engagement and usage rates for your chest box placements, take over the screen with the offer, rather than putting it as a small button in the corner of the screen. Check out the example below from Storyngton Hall - this screen takeover can be shown during a level or at the end. Note how the design is exciting and makes the box seem magical and valuable.

7. Multiple videos in a row

Instead of showing a one off rewarded video placement, you can encourage users to watch multiple videos consecutively in order to win a lucrative reward.

Offer a small reward for each one, and also test out adding a roulette or spinning wheel with a generous prize at the end as a bonus to the user.

This can help encourage them to get to the end of the multiple rewarded video placement and ensures they end on a positive note. To help users better understand there are still more videos to watch, while giving them incentive to watch many in a row, add a checkmark next to every video they complete.

Check out this example from Storyngton Hall - it offers users to watch 5 ads in a row, earning 50 coins for each video in addition to a special mystery reward after the fifth video.

Make sure that the rewarded video provider you’re working with can guarantee zero latency, like ironSource does. You want to make sure the next ad is always available and ready to play - otherwise you risk damaging your game’s user experience.

Use daily bonuses as a retention boosting mechanism. The placement can be used in different ways: for example, you could give users a daily bonus for free and use the rewarded video to multiply the offer, or you could provide rewarded videos to users as a way to unlock daily rewards that ordinarily cost real money.

The example below is from Jam City's game, Vineyard Valley, which gives users 100 coins as a free daily bonus, and offers an additional, mysterious bonus through watching a rewarded video. Note that they clearly state what users need to do and what they get in return using copy. Also, they encourage users to log in again the next day for more rewards - clearly showing its objective of increasing retention.

In-level bonuses let users unlock boosters inside the game’s levels by watching rewarded videos. These placements help players pass the level - the more people win, the more they can continue playing. The longer people spend playing your game, the greater your opportunities are to monetize your content. In this regard, it’s a similar logic to the “add more moves” placement.

In terms of the traffic driver itself, place it in the corner of the screen from the start of the mission, and make sure it’s animated enough to grab users’ attention while being non-disruptive to the gameplay experience. In Hell’s Kitchen, the developer places the traffic driver on the right side of the screen, using a video symbol to make it clear that it’s a rewarded video placement, and a purple background to help it stand out.

Once the user opens the ad, they see a wheel of fortune that contains several types of boosters.

Rewarded ads that give users extra choices are particularly effective in choice-based or narrative games, where choosing from a selection of on-screen sentences or items directly impacts the gameplay experience.

For example, in a narrative-based game, one choice might be a free but less appealing choice, while the other two options are much more appealing but require gems or in-game currency to select.

Using rewarded video to give users extra currency to unlock the best options is an effective strategy for maximizing revenue while helping users get the most out of their experience.

Step into your users' shoes

Use these examples as inspiration, but be sure to A/B test everything you implement in your own game. Ultimately, putting yourself in your users’ shoes will help you provide the most valuable placements with the best user experience. If you focus on that, high engagement rates, usage rates, and ARPDAU will come naturally.

Finally, continue looking for inspiration from other game genres, make sure to research what your competitors are doing, and stay updated with your genre’s benchmarks for engagement and usage rates. That way, you have a reference point to measure whether your placements are performing well or not.