In the webinar “How to Scale Your App Portfolio with Cross Promotion,” ironSource Growth Strategy Manager, Omer Katzburg, walks you through cross promotion and debunked misconceptions about its use.

First, Omer explains the gist of cross promotion - it’s a form of user acquisition where you can promote your games to users already playing your other games. It’s a hit with top developers -  since you already have user data, this means not only greater targeting capabilities but also greater knowledge of the audience, which can also help ease a game launch. Also, utilizing users in multiple games ensures that you can save high quality users in your portfolio

Next, Omer broke down four of the main misconceptions about cross promotion. Let’s dive in:

Misconception #1: Cross promotion is only for hyper-casual games

Cross promotion has a big impact - it contributes to 20-50% of leading developers’ user acquisition activity. According to Omer, this is not only true for hyper-casual developers, but also casual developers, and professionals producing games of many different genres.

Finding success in cross promotion is not related to the game genre, but rather the size of the developer’s portfolio. A developer with at least 2 games in their portfolio is good to go - but the more games you have, the more significant the cross promotion activity. The cross promotion tool is a win-win - by keeping your users in your portfolio, you’re making the most out of quality users and also preventing them from potentially leaving to competing games.

Today, Omer explains, there’s no reason to put users into boxes - many gamers are playing different genres simultaneously. Even if you have a diverse portfolio of different types of games, cross promotion can be a huge help. It’s true - not every game genre combination might work together well, so utilizing and understanding your first-party data is crucial to figure out which games pair best.

If you don’t necessarily have this data yet, trial and error is key. Utilize your regular user acquisition data - if you have a puzzle game, and you’re getting high quality users from a lucky reward game, you can assume that cross promotion is a good fit. For example, the ironSource data below displays additional game genres that lucky reward players installed (alongside playing lucky reward games). 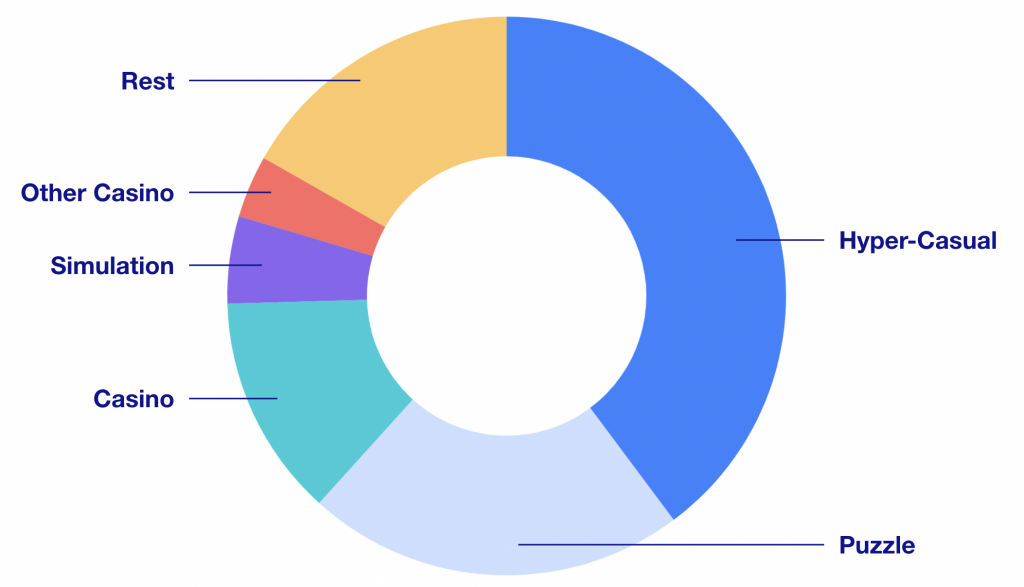 Developers can dig deeper to understand user trends by mapping it out - in this case, laying out the correlation between game categories based on IPM or any important KPI. Let’s say you want to know where to advertise your casual game - you can see that mid core games advertised in casino games have very high IPMs. Mid core games advertised in sports games don’t have the same success, so you can tailor your advertising accordingly. You can also assess the mapped data for ARPU or any other KPI that is relevant to determine your best cross promotion strategy. Note: The mapping presented here is high-level mapping - make sure to go more granular and to create and test this mapping specifically for every game you have. 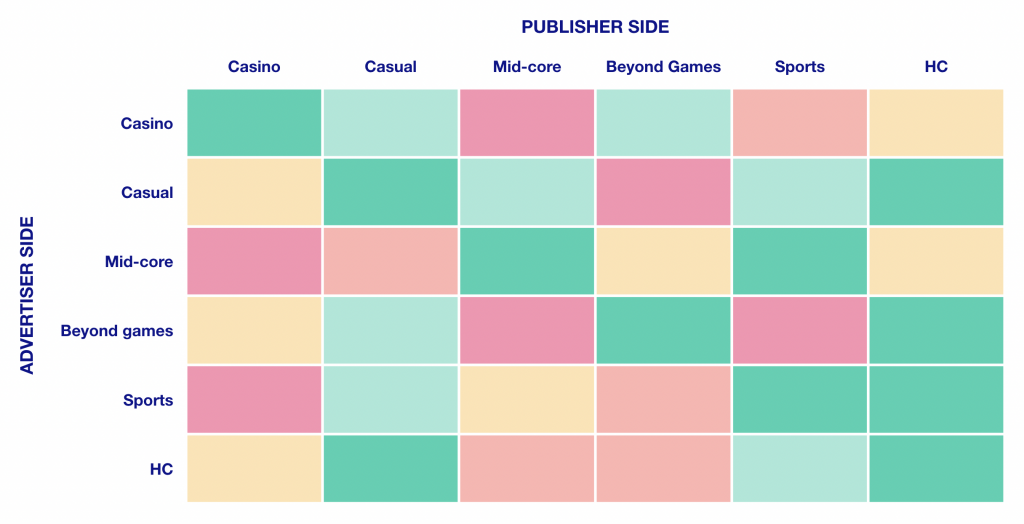 Cannibalization is an important concern, but in the context of cross promotion, you can lower this risk. The key to limiting cannibalization is simple: find the balance between user churn from the publishing game and user engagement with the advertised game. Note: if you’re a hyper casual publisher, it’s even less of a concern - hyper casual gamers are exposed to many competitor ads and usually have low retention rates anyway.

According to Omer, the more similar the published and advertised games are, the higher chance of cannibalization. This is because users won’t usually play two similar games at the same time - if a user installs a new similar game, the probability that he will churn from the former game is higher. Let’s say you’re advertising a mid-core RPG game in a published mid-core RPG game, you’re increasing the risk of cannibalization. On the other hand, if you advertise a slots game in this mid-core RPG game, scaling up would be a challenge because the genres have low IPM correlation.

Reducing cannibalization is not only about the type of game, but also the users themselves. You can use your first-party data to find the right user segments for cross promotion - then combine this segment with your genre mapping (or any other method). This strategic combination should lead to a solid understanding of how to maximize your cross promotion strategy. Even if you need to keep testing for a while to find the sweet spot, the potential for scaling up is always there.

Misconception #4: I should only cross promote low quality segments

Finally, it’s essential to recognize exactly which user segments are best for cross promotion. If you only cross promote your low value (generally non-paying) segments, they’re less likely to budge and actually start paying. It’s not so easy to convince someone who never pays for games to start paying. As Omer quotes: “once a non-payer, usually a non-payer.”

So the solution is to find the highest payers, right? Not quite. Engaged and paying users tend to act the same no matter the game genre. But still, it’s best not to cross promote all of your highest paying segments. For example, big spenders are likely to be very loyal to the game, but if they move to another game, their loyalty toward this new game might not be replicated. To maximize your impact using cross promotion, it's essential to use your first-party data and find segments somewhere in the middle: open to paying, but not so loyal that you’re losing a great customer.

We can see how the common myths about cross promotion shouldn’t hinder you from trying it out. Demystifying concerns about cross promotion allows us to utilize its many benefits, strategically using first-party user data and carefully crafted research to make the most informed and profitable decisions to increase your user acquisition. To learn more, watch the full webinar below.