From core to meta gameplay: 8 ad placements to boost your hyper-casual game’s LTV

The hyper-causal genre thrives because of its famously low CPIs - and low LTVs - which enable developers to affordably buy users at scale. But with today’s market conditions pushing up CPIs across the board, hyper-causal developers need to increase their LTV to stay competitive.

The best way to do that and boost revenue is by optimizing the ad placement strategy and adding layers beyond the core gameplay, like metagames. Let’s explore the top 8 hyper-casual placements - core gaming and beyond.

Before you start adapting your placement strategy for higher LTV, first make sure you’ve got the basics down - with ad placements in the core gameplay. To monetize users and retain them at the same time, leverage rewarded video ads as a tool to help each player achieve their goals (in exchange for a bit of their time).

Rewarded videos can be very useful even before core gameplay begins - starting right before the player starts playing the game.

Each pre-level traffic driver should pop-up and offer the player exactly what can be useful in that upcoming level - like boosters, skills, or extra items. Not only does this pleasant surprise motivate the player to start the level, it creates a precedent that ad placements are here to help. 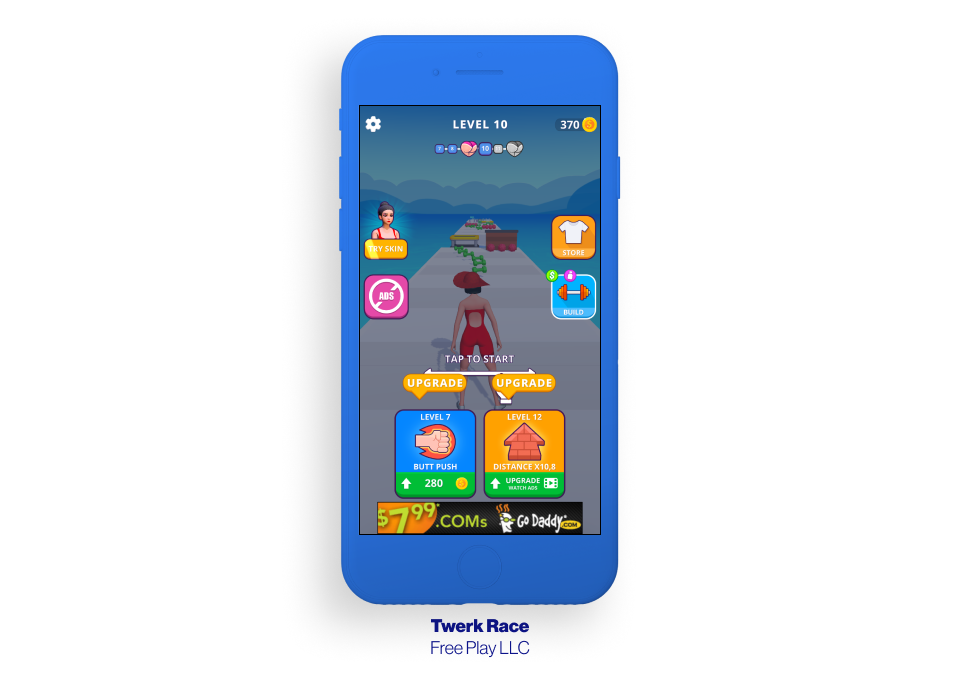 Once the level begins, rewarded videos can also be a key source of support during the actual gameplay. These traffic drivers can be pop-ups, but unlike pre-level placements, you have more options - they don’t need to suddenly appear on the screen to grab the user’s attention. Rather, these placements can sit in the level, and players get to decide whether to engage with them or not. It sounds passive - but since players will see a clear and easy opportunity to get a reward, they’ll be motivated to engage with them.

For example, if a player sees a glowing rewarded video traffic driver sitting inside the level, they’re likely to click on it - even without a big pop-up prompting them to do so. To meet users’ expectations, these traffic drivers should offer something useful to the user at the time, like a skill upgrade. 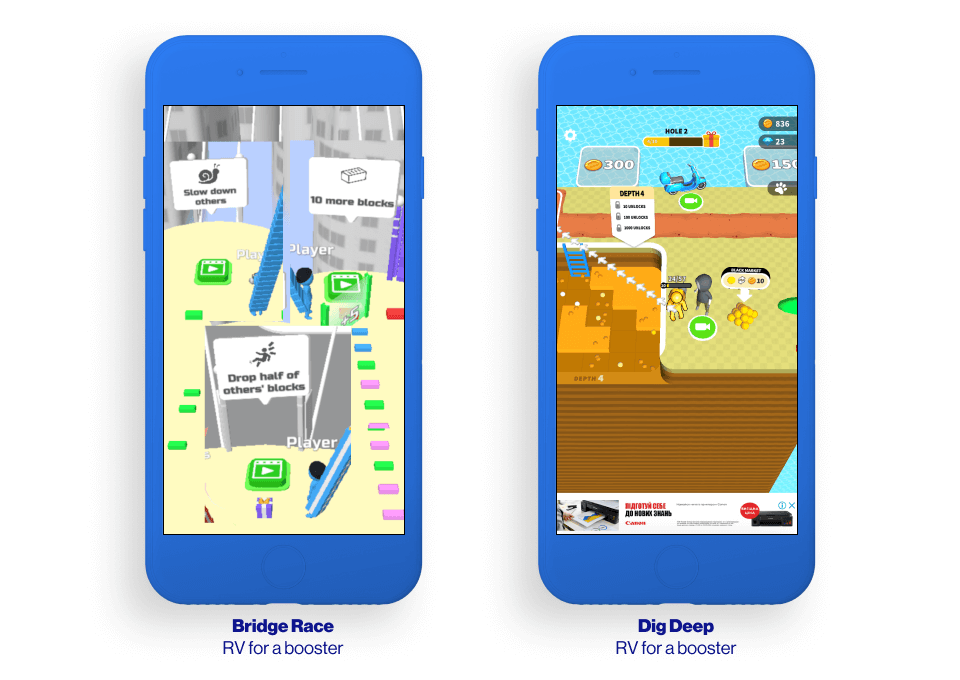 Even once the level ends, ad placements can and should support the player’s progress in the game. If the player wins, the placement can offer to multiply their rewards, or if the player loses,  it can give the player a chance to revive and restart the level.

Offering a restart can be tricky when levels become very long - so another placement option is allowing the player to return to the point they died in the level. To give players the extra motivation they need to engage with the placement and try again, you can use progress bars like in the example below to show them just how close they were to finishing the level. 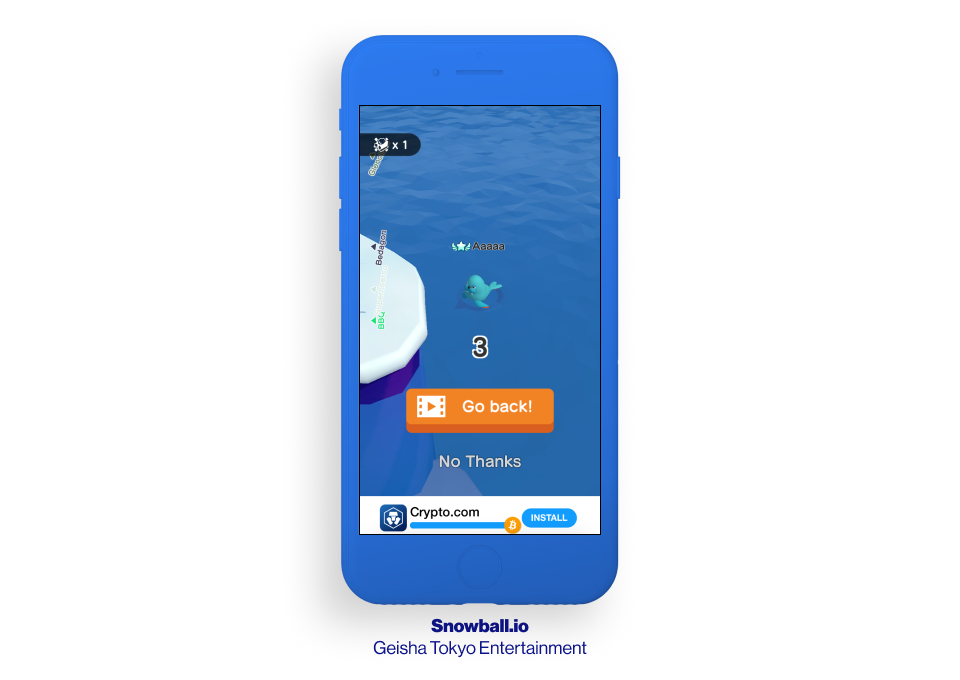 More hyper-casual games are building meta games, since they offer an additional way to boost retention - essentially they keep players engaged beyond traditional core gameplay. To bump LTV even higher, integrate the right placements to support it.

The metagames that offer a space for players to build and buy items, like equipment and living spaces, are a great place to incorporate rewarded videos. That’s because the rewards from the rewarded videos can give players the in-game cash needed to build and buy items. This placement option is a win for your game economy for two reasons - (1) players are motivated to spend their in-game cash and also (2) the items they acquire can become cash generators themselves.

For example, in Twerk Race by Free Play, players can enter the gym at any time - the more equipment the player has, the more in-game cash they receive in return - so they’re motivated to buy even more equipment to fill it up. As soon as a new piece of equipment exceeds a player’s in-game budget, they can pay by watching a rewarded video instead. 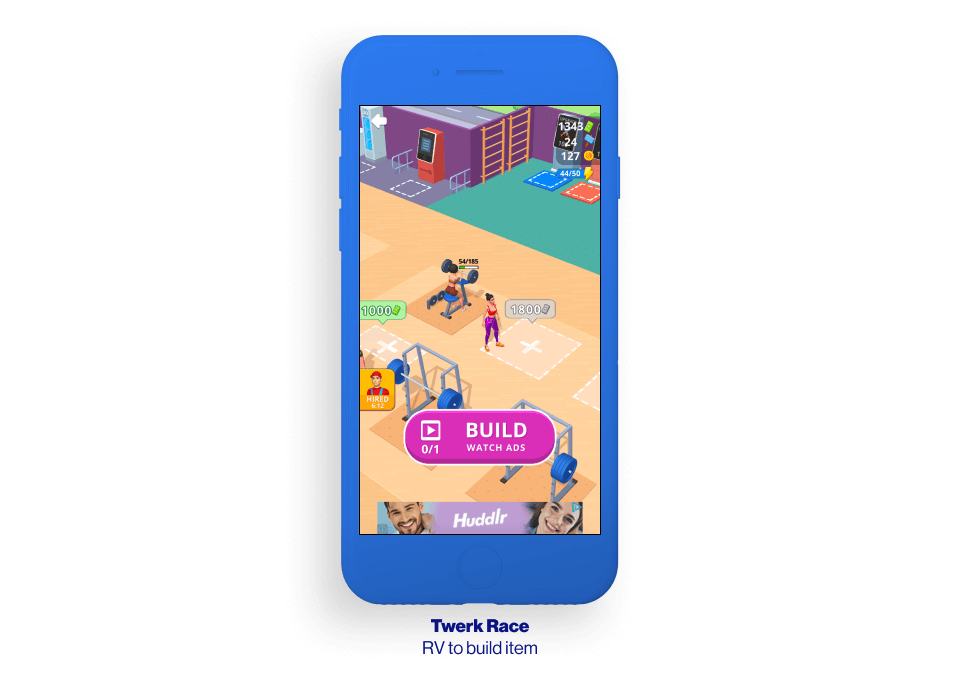 There’s another common metagame where players can unlock more layers of the meta game experience - all players need to do is spend money or (you guessed it) watch a rewarded video. Players are extra motivated to engage with these ads because they can access a new and mysterious game experience.

In Crowd Evolution by Rollic Games, for example, the player hops between different islands to unlock different meta activities on each island - all they need to do is engage with an ad placement.

Depending on the game, players have the ability to unlock even more activities - in Arm Simulator by Supersonic, for example, players engage with the placement to see a continuation of the core game story. 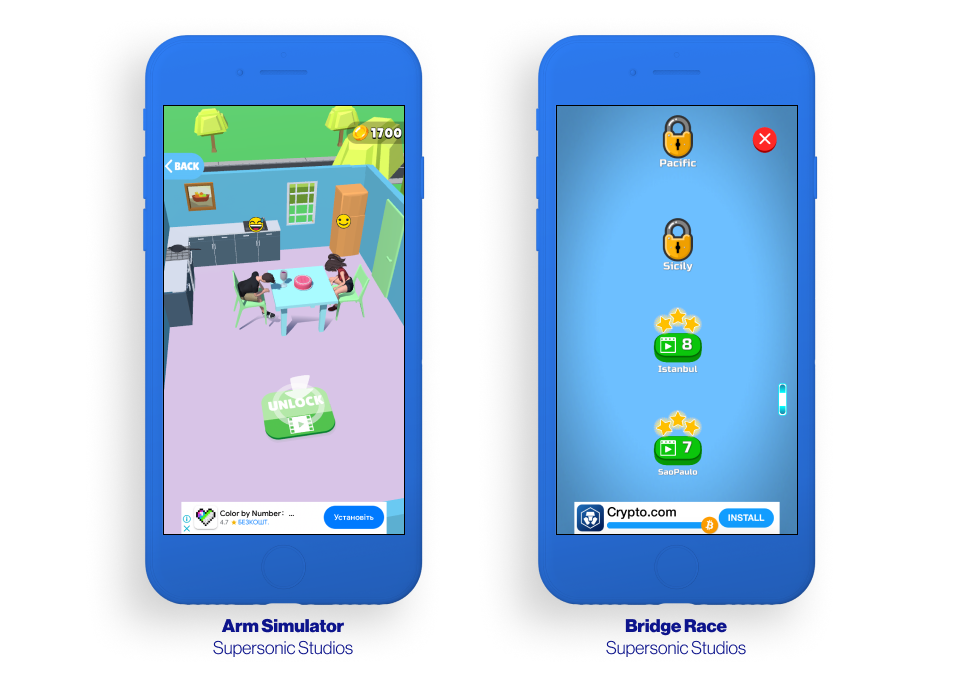 Beyond core and meta gameplay, there’s even more ways to boost LTV in hyper-casual games - here are the ad placements that can best support them.

Like weapons or power ups, skins offer the player an opportunity to experience the game in a new, exciting way - which makes it an ideal opportunity to drop in a rewarded video placement and let players test it out first-hand.

Many hyper-casual games offer users to try out a skin before unlocking it. This gives the player an exciting first hand-experience that often motivates them to want to unlock the real thing - which might require hard or soft currency, or in the example below, watching a rewarded video.

In Lunch Box Ready, for example, players are offered a week’s worth of unique and valuable rewards, like coins and prizes - all they need to do is watch rewarded videos to get each one. If just a single daily reward can motivate users - imagine their excitement seeing how many rewards they can receive over a longer period of time.  This way, players can see their progress in completing the missions - and get the extra boost of motivation to participate in the next one. 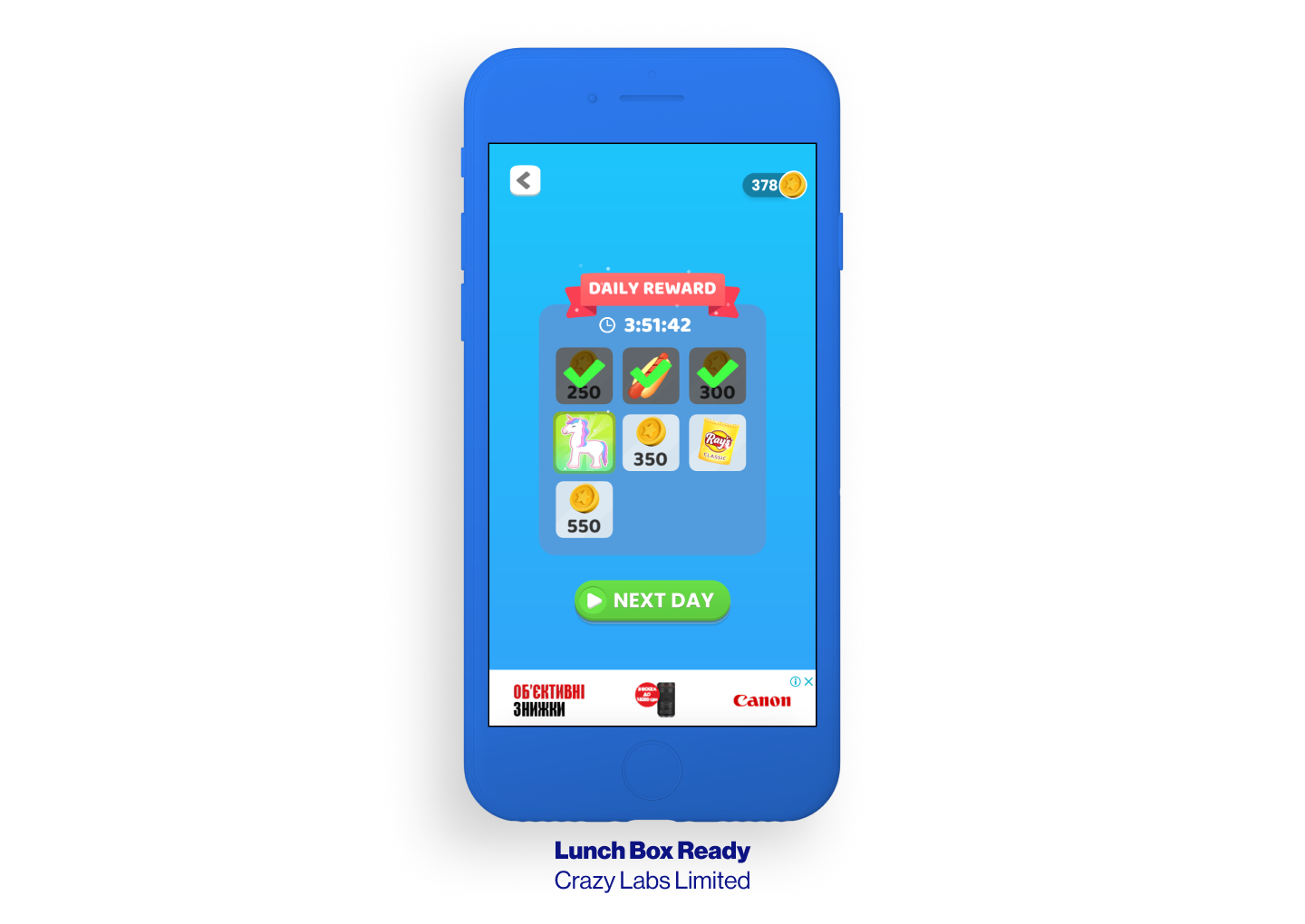 By offering players exactly what they need at a specific moment, ad placements help reward player motivation - so try placing them where players feel most motivated: the leaderboard. The leaderboard can help ignite the player’s sense of competition and - because they can continually progress in the leaderboard over time - even their long-term retention. As the player is already considering their progress in the game, why not offer a rewarded video placement that can help them progress even further?

That’s exactly what Bridge Race by Supersonic does, for example - they make it clear that players who watch a quick rewarded video get an extra 5 stars in the game - and an immediate boost in the leaderboard. 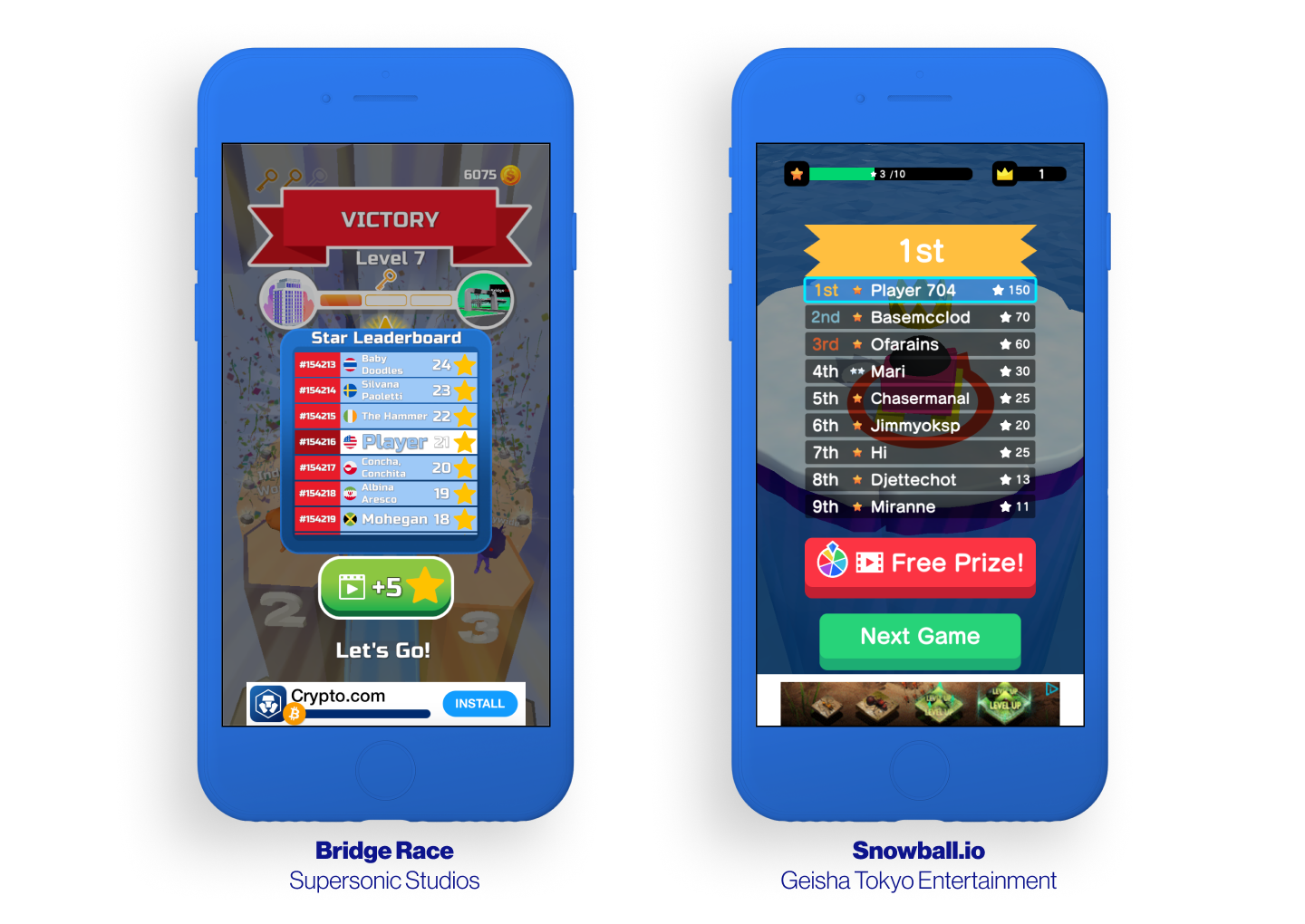 As the hyper-casual gaming world grows, the only way to stay competitive is by growing with it - not only by deepening your gaming experience, but diversifying our placement experience to match it. Whether players are engaged in core or meta gameplay - the placements they interact with should always meet their unique interests, ultimately keeping them engaged and their user experience positive.