How to calculate a ROAS goal for your game's UA strategy 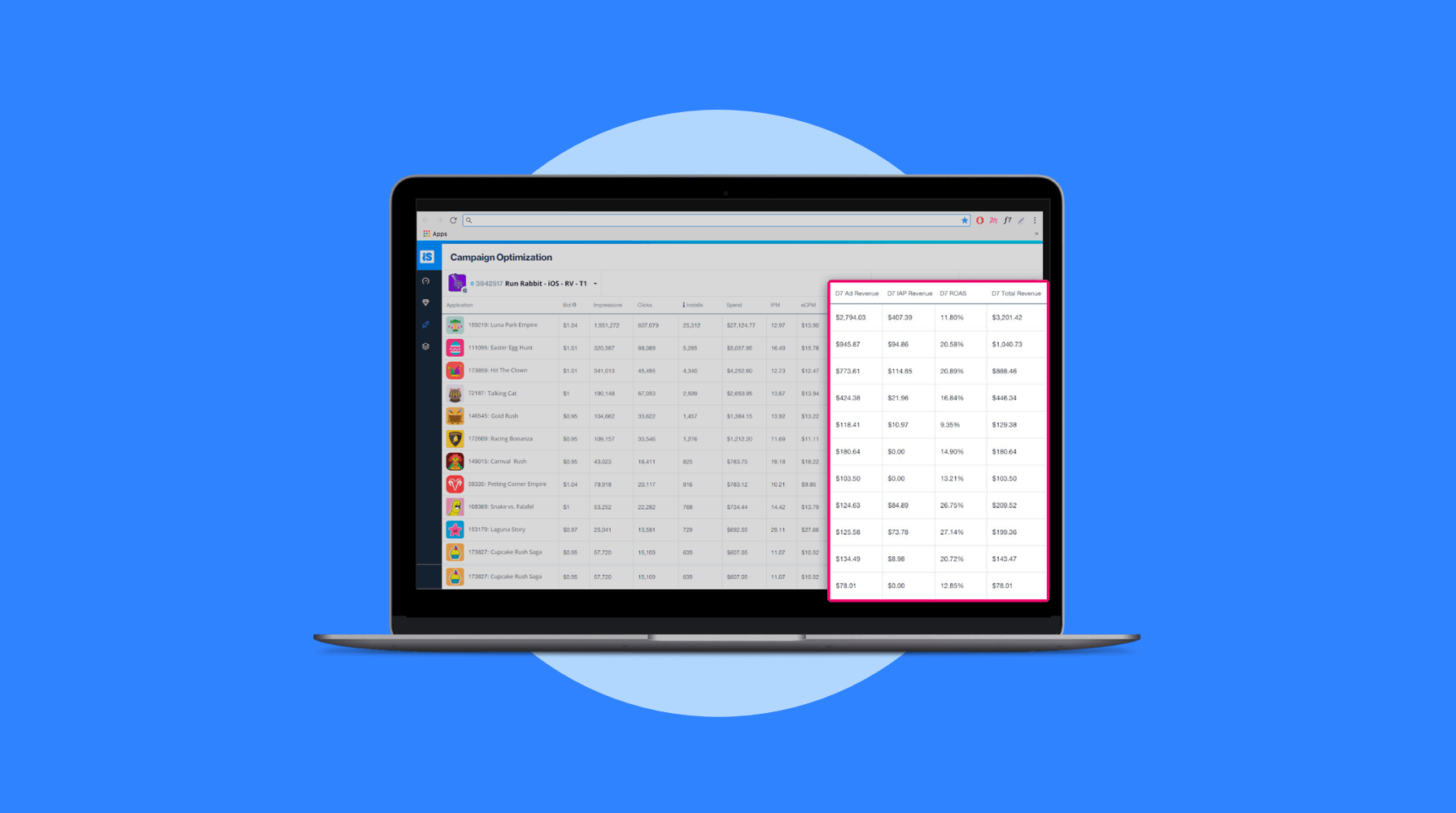 User acquisition managers today face three pain points. First, is having to manually manage dozens of campaigns across multiple platforms with thousands of supply sources; second, is the complexity of finding an efficient methodology to optimize towards true ROAS; and third but not least is the lack of accurate impression level revenue to provide a complete ARPU data set, for providing a holistic understanding of users' value.

ironSource’s ROAS Optimizer not only solves these three issues, but is the only product on the market built to optimize UA campaigns towards ROAS according to both in-app purchase and ad revenue data.

The key to making the most out of the ROAS Optimizer is determining the right ROAS goal, which is the percentage ad spend you’d like to recoup by a certain day in the user lifecycle. For example, if your goal is 80% Day 7 ROAS, that means that you intend to recoup 80% of the money you spent acquiring a user by the 7th day of that user’s lifecycle. If you choose the right goal (we’ll explain how to later on), you’re guaranteed to scale quickly and profitably.

Here are 5 tips you should consider to help you choose the right ROAS goal and get the most out of the ROAS Optimizer, whether you’re using it to optimize according to IAP data, ad revenue data, or a hybrid of the two.

1. Set your ARPU curve and LTV

The first step in calculating your ROAS goal is determining your ARPU curve and LTV. The LTV you set will be the base of the ROAS goal the optimizer works towards. It should be noted that in this stage you should be building your ARPU curve based on data from paid users who have been acquired through user acquisition.

ARPU is calculated by summing up total app revenue (including both ad revenue and in-app purchases) of a certain age cohort, and dividing it by the number of installs. The ARPU curve plots revenue against retention and is cumulative - as seen below, the more days that pass by, the more revenue a user is generating.

In its most basic form, LTV is all the revenue a single user will generate from the time they download the app or game until they abandon the app altogether, which can happen anytime, on Day 1, 3, 7, 30, or even 90. For app developers and marketers, LTV is the main metric to consider when building a game, measuring the profitability of users against retention and identifying more lucrative user segments. 2. Factor in organic uplift on top of LTV

In order to optimize towards a ROAS goal based on a holistic data set, you need to factor in organic uplift, installs that occurs as a result of a user actively browsing and searching in an app store, or through word of mouth. This is because the ARPU curve we built in step one only measures users bought through UA activity. Let’s say 20% of your game’s users are organic - unless you factor in this uplift, a significant chunk of user revenue is being omitted from your ARPU curve.

How do you measure organic uplift?

Check your analytics to see where your revenue is coming from, whether that be paid campaigns or organic users.

Let’s say that 15% of your game revenue is coming from organic users. In order to translate this information to your LTV, first calculate the percentage of organic uplift [organic revenue/paid revenue], in this case 18%. Then multiply your paid LTV and then add that number to your paid LTV. Follow this formula:

Once you’ve determined your ARPU curve, your LTV, and factored in organic uplift, it’s time to finally decide on your ROAS goal. First you need to set your margins, which in turn will inform you of your breakeven day, and you will then use to calculate the ROAS goal. How you set your margins generally depends on cash flow and benchmarks for your game’s genre.

The main decision here is between optimizing towards margin per user versus long-term profit. High margins mean you make more profit short-term per user but lower scale, whereas optimizing towards profit means setting lower margins per user but achieving higher scale and, in the long-run, potentially more profit. The ideal goal will yield high profit at high scale. Let’s breakdown what these two approaches actually mean for your games business with examples.

What happens if you increase your margin per user?

Why does increasing your margin per user reduce your scale? Well, by increasing margins, you lower your CPI, so you’re spending less per install. Lowering your CPIs places you further down the waterfall of the ad network you’re operating on, which means you lose a lot of potential users to other developers higher up the waterfall who have higher bids in place. What happens if you lower your margins?

In business lingo, this strategy would be called economies of scale. It achieves greater scale because setting lower margins, in other words making less money per user in the short-run, means you are bidding on higher CPI, which places you towards the top of the waterfall in the ad network.

This approach is better suited to developers trying to build up their data and strengthen their understanding of user behaviour, as it achieves greater scale. With this in mind, how do you actually calculate the ROAS goal?

An important tip for setting your ROAS goal: If you’re using the ad revenue optimizer, we advise optimizing towards ROAS Day 3, and if you’re focusing on IAP revenue or a mix of both, optimize towards ROAS Day 7. Follow this formula: Divide ARPU D3 by the ARPU value of the recoupment day - AKA the day when the user yields a 100% return on your investment to acquire them. In this case, that is on D60, and the sum is 0.31 divided by 0.67, which equals 46%. This means by day 3, we expect the user to generate 46% of their total value. Your ROAS goal in this case is 46%.

Calculating LTV depends on several factors - operating system, geos, and the genre of the game. For example, if you’re targeting Android users in developing countries for your hyper-casual game (a genre with low quality users), then your LTV will be lower than that of a game targeting iOS users in Western European markets for a midcore title.

Therefore, your ROAS goal should be tailored according to the different geos, operating systems, and other segments that impact your potential revenues which you are targeting in your UA activity. Without a granular approach, LTV - which is the foundation of your ROAS goal - loses its value in terms of optimizing campaigns, and therefore the ROAS Optimizer will not bring you the most effective results. LTV of an Android user acquired in Brazil, for instance, will typically be lower than that of an iOS user from the U.S.

It is important to ensure these best practices are applied dynamically, which is to say repeat them on a bi-weekly basis. This is because LTV is an ever-changing metric that is impacted by several external factors. For example, the entrance of new competitors can disrupt the market, as can the release of a new title from a major developer that catalyzes a movement of quality users from one game to another. Seasonality is another important factor to bear in mind: Holidays and special events, from Christmas to Chinese New Year, impact app economy metrics and as a result will impact LTV, and ultimately your ROAS goal.

Internal changes also cannot be ignored, like game maturity, the implementation of new game features, and rolling out new in-game monetization channels such as an interstitial ad unit. The changes on the market and on user behavior caused by these factors make it crucial to calculate and determine your game’s ARPU curve and LTV frequently, and update your ROAS goal accordingly.

Click here to learn more about the ironSource ROAS Optimizer