What is gametech? An overview of the ecosystem 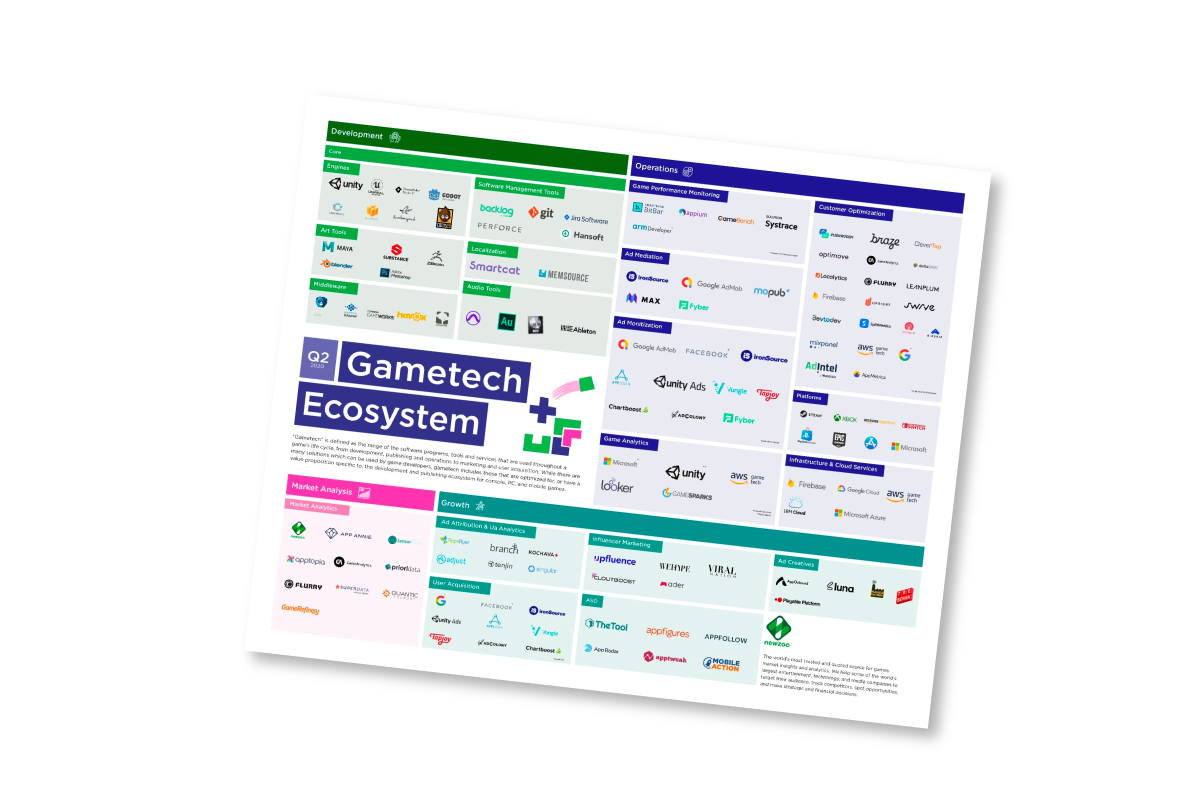 Just five years ago, gaming was a $91 billion-a year industry: fast forward to 2020, and it is set to generate an astonishing $160 billion in revenue. To put this figure into perspective, it makes the gaming market over double the size of the global recorded music industry (around $19 billion) and the worldwide film box office (around $43 billion) combined.

While there have always been technology companies supporting the video game industry, the explosive growth it has experienced in the last decade, spearheaded by mobile gaming, has fed and fueled an extensive ecosystem of supporting companies which are further accelerating this growth. As these companies have consolidated their positions within the different layers of the industry, and increased their contribution to its continuous growth, leading market research firm Newzoo released an infographic to map out the ecosystem, which has become known as “gametech”. Below, we look at what defines this ecosystem and dive into the main categories and companies.

What makes a gametech company

The evolution and rising importance of this sector led Newzoo to mark a separation between companies with relevant products, and those with dedicated solutions that answer the specific needs of those on the field, building the games.

Whereas some companies build products to support the widest variety of customers with one-size-fits all solutions, the defining characteristic of a gametech company is having a product optimized towards serving the gaming industry, from console to mobile. It is this focus that has catalyzed the explosive growth of the market, and as competition increases at every layer, new innovations are born that propel its growth further.

A case in point is the rise of innovative new tools in the last few years to empower game developers to better measure, optimize, and automate their ad monetization. This is in response to the growing significance of ad revenue as a meaningful revenue stream for game developers. The explosive arrival of hyper-casual mobile games, whose entire business model is based on ad revenue, has added impetus to this, and this is reflected in the map’s categories.

Let’s dive into Newzoo’s map of the gametech ecosystem. Newzoo's map divides the gametech ecosystem into four categories, which all have multiple subcategories. We’ll go through all four, highlighting some notable companies from each.

Development includes every aspect needed to actually build a game. It is broken down into engines, like Unreal (owned by Epic Games and a large factor behind their $15 billion valuation) and Unity (valued at $6 billion); art tools like Blender (who received a $1.2M grant from Epic Games last year) and Adobe’s Substance; middleware like Easy Anti-Cheat and Battleye; in addition to audio tools, software management tools, and localization tools.

The latter has become particularly important in recent years, as mobile devices have become more affordable across the globe, leading to the proliferation of the global mobile gaming audience. At the same time, the technology to target these users at scale through UA campaigns has become increasingly advanced. The combination of these factors has provided a fertile ground for the growth of localization tools.

In the game tech ecosystem, the operations category is focused largely on mobile games. Newzoo breaks it down into game performance monitoring, with leading companies including GameBench and Bitbar; ad mediation companies like ironSource and Admob (owned by Google) which optimize ad monetization operations; ad monetization tools, such as ironSource and Facebook Audience Network; and customer engagement such as One Signal and Airship.

In addition, game analytics is an important category that helps developers measure and analyze the health of their games: notable companies in this space include devtodev and the appropriately named GameAnalytics.

Another category within operations is platforms, which is dominated by a handful of players: Steam and Epic for PC games, Playstation and Xbox for console games, and Google Play and the App Store dominating the mobile space. Epic, launched by the makers of Fortnite in December 2018, has proven that it’s possible for newcomers to penetrate this market, but it’s still relatively early days. The final subcategory in Newzoo’s breakdown of operations is infrastructure and cloud services, like Google Cloud, Firebase (purchased by Google in 2014), and AWS: Game Tech.

The marketing ecosystem within game tech is equally multi-layered. User acquisition is a significant part, with the pie including companies like ironSource, UnityAds, and Facebook. A crucial component of UA, ad creatives, has become a subcategory of growth itself, with companies like Luna Labs and AppOnboard carving a niche for themselves. App Store Optimization (ASO) has also emerged as a subcategory of its own in recent years, with companies like Splitmetrics and Storemaven helping UA managers improve their games’ app store pages to better attract and convert users.

In the context of streaming’s explosive growth, influencers, another growth subcategory, have become increasingly important tools, particularly for PC and console titles, which dominate the streaming space. Influencers are also of growing use to mobile games, in the context of increased automation within user acquisition and competition for users’ attention.

Another important part of the UA process is ad attribution and UA analytics, which allows UA managers to track where their acquired traffic of new gamers has come from, in addition to providing various fraud solutions. Key players in this space are AppsFlyer, valued over $1 billion, and Adjust, who received $255 million in investment last year.

Analyzing all this growth are companies such as Newzoo, GameRefinery, App Annie, and GameAnalytics, which was bought by Chinese ad-tech firm Mobvista in 2016. Research firm Quantic Foundry also provides valuable insight into gamer motivations.

The growth of the game tech ecosystem shows no signs of slowing down, as games become fixtures in the way people spend their free time. There are numerous reasons why it is superseding other entertainment categories such as film and television. Perhaps its most valuable advantage is its unlimited ability to leverage content (theoretically, video games never need to “end”: new levels and features can frequently be added and optimized), which in turn removes any kind of limit to the potential revenue generated per user, whether that be from ads or in-game purchases. This contrasts starkly with streaming platforms like Netflix where content has an expiry date (be it the end of a movie or the end of a series) and the maximum revenue a user can generate is capped at the subscription fee, regardless of whether they watch 5 or 500 episodes a month.

So, what does the future have in store for the gametech ecosystem? As has been the case until now, we can expect increased competition in all layers to drive further innovation, whether that be core development tools to create brand new gaming experiences, or new products for UA managers to drive and analyze marketing campaigns. Because gaming is more reliant on technology than other entertainment mediums, the impact of technological change is stronger, and thus further innovations will lead to a continuous cycle of growth, in which developers, consumers and tech companies enjoy the rewards.