Samsung smartphones in 2023: The users, innovation, and technology

The global smartphone market share is projected to grow from $484.81 billion in 2022 to $792.51 billion in 2029 according to Fortune Business Insights. With so many devices in the market, you have a valuable opportunity to scale your advertising with a high-ROAS channel, on-device advertising.

On-device advertising connects advertisers directly with OEMs and carriers, placing your app in front of users at pivotal moments throughout the device experience - such as during device setup. With tech development allowing for rich interactions that engage and retain customers, advertisers can expect a conversion rate (CVR) upwards of 20% with this channel. It’s a safe, sure-fire way to reach every user turning to their smartphones. The world’s largest smartphone brand? Samsung.

In the very beginning, back in 1938 in Korea, Samsung traded dried fish and other food products. It was even once a major player in insurance, textiles, and construction. Today, Samsung is the biggest electronics company in the world and drives the booming Korean economy. Let’s dive into the Samsung smartphone market, the user base, and Samsung trends in 2023.

Identifying the nearly 1B Samsung users

There were 992.4 million active Samsung smartphone owners in the world in 2020 according to Newzoo - and this number is undoubtedly higher in 2023. Before running campaigns directly on Samsung devices, it’s important to be aware of the customers you’ll be reaching. This will allow you to optimize your on-device campaigns as effectively as possible.

With Gen X taking up a large portion of the US workforce, 33% according to LiveCareer, Samsung users are largely business age and have likely reached the top in their professions. Gen X also makes up a large portion of purchasing power in the US - they have money to spend. This means that by making Samsung a core channel of your marketing strategy, you’re reaching an audience with great influence over household and company decisions. You’re also reaching an audience that spends more time on their phones - Gen Xers spend about 21 hours per week on their smartphones while millennials spend 19 hours according to Herosmyth. 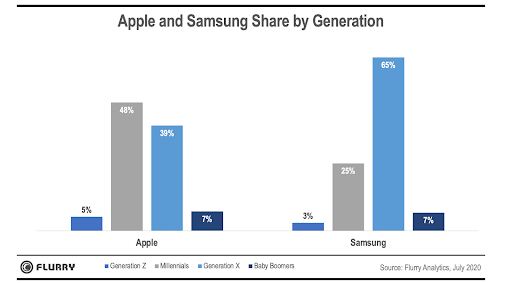 Android users are 57% more likely to prefer a full-featured, advanced device that’s less attractive as opposed to a sleek device that only does a few things according to ansonalex. With all Samsung smartphones and tablets using the Android operating system, this statistic can be extended to Samsung users.

Samsung is known to push the envelope on innovation with every phone they release, and its users put a lot of value in the tech advancements that have improved device functioning. For example, the ability to work on two apps on the same screen at the same time with a Samsung device is much more important than the size and color of the device.

By advertising directly on Samsung devices, you’re reaching early adopters. They are likely to look past the potential challenges of being the first to jump into a new technology. Samsung users will embrace on-device advertising placements as a new and unique feature on their device - like Aura’s Game Spotlight, which puts a new game on users’ phones every week based on their current preferences, or Aura’s In-Life App Discovery, which recommends your app to users during device updates.

Samsung leads Android phones with 63.9% trade-in brand loyalty, while just 10.8% of users stick with other Android devices according to Tom's Guide. Once consumers start using Samsung devices, they’re likely to stay loyal to the brand.

When running UA campaigns, the ultimate goal is to acquire users that will remain loyal in the long term. Advertising on Samsung devices means reaching users that are dedicated to the brands they engage with and are unlikely to switch their loyalty once they get started.

You’re also reaching the generation with the highest likelihood of making brand loyalty a priority - Gen X has the highest rate of brand loyalty of any of the generations according to Streng. All of this means that if you reach users with your food delivery app early on in the Samsung device lifecycle, users are likely to be unwavered by ads for other food delivery apps later down the road.

So, get to Samsung users first with on-device advertising, and they’re likely to stick around over the long term.

Trends and innovations from Samsung

Let’s dive into the innovations and trends shaping the Samsung brand in 2023.

The future is foldable

Half of US consumers are either very (16%) or somewhat (34%) interested in buying a foldable phone as their next device according to CNET, and Samsung is the first-mover in this cutting edge technology. In 2019, Samsung released the Galaxy Z series which is where all of its foldables live, including the 2022 Fold 4 and Flip 4 and whatever big releases will come in 2023.

Watch how they’re made: https://news.samsung.com/global/video-behind-the-foldable-phones-in-our-pockets

For advertisers, these types of devices are a valuable place to reach an engaged, growing demographic of users turning to foldables for work and play. In fact, From January to October 2022, the number of foldable smartphones Samsung contracted to enterprise customers increased by 105% compared to January to October 2021 according to Samsung.

After all, these phones make it easier to complete certain tasks which historically weren’t possible  on mobile, and are able to adapt to fit users’ needs at any moment. For example, users can easily switch between watching a movie and updating a powerpoint. On top of that, users of foldables today are likely very tech aware and excited by innovation.

You can even leverage the fold to keep users engaged and entertained, such as designing ads that allow users to reveal more ad content as they fold or unfold their devices. You also have more room to fill your ad with more important, detailed information. For example, you could have an ad that begins on one screen and ends with, “unfold to learn more.” When users unfold their phones, they’re taken to a page where they can test your app or go through an onboarding.

At CES 2023, Samsung announced a new technology for foldable phones. With Flex Hybrid, the left side of the display features the foldable aspect and the slidable technology is on the right side. The display on the Flex Slidable Solo expands in just one direction and the display on the Flex Slidable Duet expands in both directions. The display is about 13 to 14 inches un-expanded, which is quite portable, and it expands all the way to 17.3 inches.

Many large chip manufacturers have begun scaling back their chip production amid falling demand and an abundance of chips already in the ecosystem. On the contrary, Samsung plans to increase chip production at its largest semiconductor plant, P3 factory in Pyeongtaek, in 2023. This means when demand for chips recovers, Samsung will be ahead in performance capabilities and will be able to take a big portion of market share.

Back in June 2022, Samsung was the first manufacturer to kick off mass production of 3-nanometer chips, ahead of TSMC and Intel. Today, the first generation of “3nm process nodes have reached a “perfect” level of production yield.”

As a leader in chip making, Samsung phones are always one, or even two steps, ahead of competitors in smartphone performance. With each new chip generation, Samsung phones have faster processing, reduced power consumption, and more sustainable performance over longer periods of time. As technology continues to evolve and get stronger, Samsung phones clearly make a great channel for your advertising strategy.

“Samsung has grown rapidly as we continue to demonstrate leadership in applying next-generation technologies to manufacturing,”

If you’re not already leveraging Samsung for your advertising strategy, it may be time to look into it, especially before the competition. After all, the users, technology, and innovation are some of the most advanced in the world, making these devices a valuable, unrivaled user acquisition channel.