How to make your console game a success on mobile

With mobile gaming holding a significant portion of the larger gaming market, studios that have traditionally focused on PC and console games are starting to put more time and resources into the space. In fact, Newzoo reports that the mobile segment is expected to outpace PC and console growth by 14% and 5%, respectively in 2021. This is because, with over 2.6 billion mobile gamers in 2020, mobile gaming brought in an estimated nearly $80 billion in revenue, compared to consoles totaling $45 billion, according to Newzoo. But as recent as 5 years ago, mobile gaming was underestimated by PC developers. What changed?

Not only have advancements in smartphone technology allowed for more elaborate mobile gaming experiences, but the diverse audience, due to the relatively low barrier to entry, is also large - cross-platform portfolios means you can reach consumers wherever they are, regardless of whether they own a console or PC. Mobile games also boast a lucrative and appealing business model. Free-to-play titles that monetize through in-app purchases and ad placements have generated immense revenue.

ironSource’s growth team has helped to adapt countless console games for mobile. Here are some of their best practices: 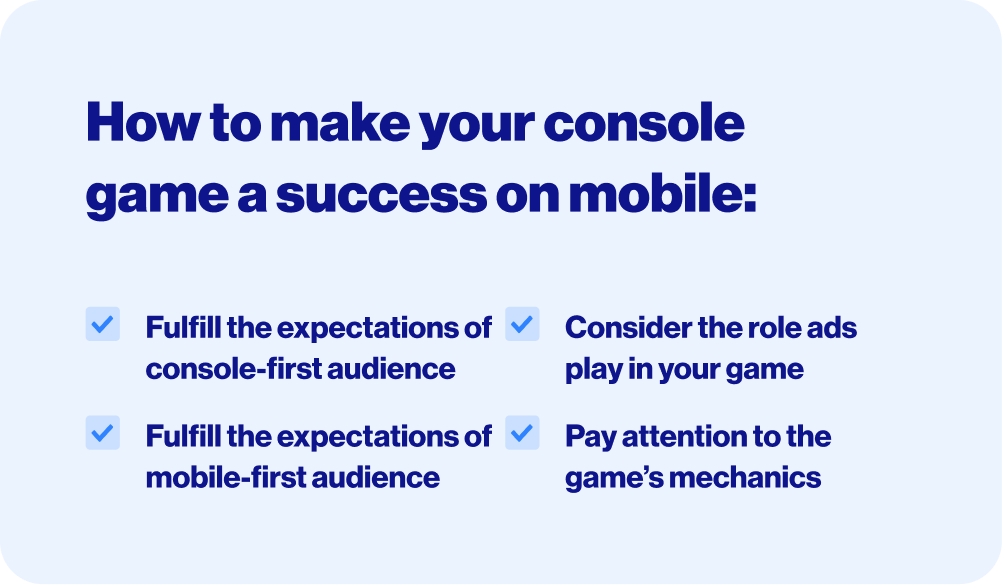 Fulfill the expectations of both mobile-first and console-first audiences

It’s important to find a balance between the expectations of your current players on console and your new mobile audience. Excited to take their game on the go, your console-first audience is likely to play across platforms, which means you need to deliver a comparable game experience on mobile. On the other hand, mobile-first players care more about the free-to-play experience - 82% of mobile gamers prefer free-to-play mobile games, according to Business of Apps.

The best way to please your console audience is to hone in on the features of gameplay that your players originally fell in love with, rather than trying to fit every detail into a small touchscreen. You want to be as consistent as possible with the core pillars of your brand and optimize what your fans enjoy about the title. For example, a console game that relies heavily on character development should spend considerable time and resources ensuring that the characters on mobile and console have identical features. A shooter game with elaborate cinematics should focus more on the core, immersive experiences of the game.

Mobile gamers, however, value the ability to level up their gameplay quickly with in-app purchases or ads. To appeal to the mobile-first audience, you’ll have to place an economic value on some of the game’s core content. The goal is to identify content that is valuable enough for players to want to spend money on, but not too valuable that console users are frustrated they can’t have it right away.

For example, while most console games have wide collections of cosmetic features already unlocked, your mobile version could allow players to buy this content through in-app purchases or rewarded video. You can also allow players to purchase more lives to reach the next level quickly. The key is to focus on retention and keep players coming back until they can’t help but make a purchase - 44% of app users won’t make an in-app purchase until they’ve interacted with the app at least ten times, according to Instabug.

While you may be worried free-to-play will deter loyal console users, making your game free to download actually removes a potential barrier for users who may be wary about downloading a game they’ve already purchased somewhere else. A ‘pay to win’ experience also doesn’t mean players have to spend money to progress, meaning players can make it to the top through pure talent if they choose.

If you choose to make your game free-to-play, you’ll need to consider how to monetize past in-app purchases, and ads are a surefire way to boost revenue. 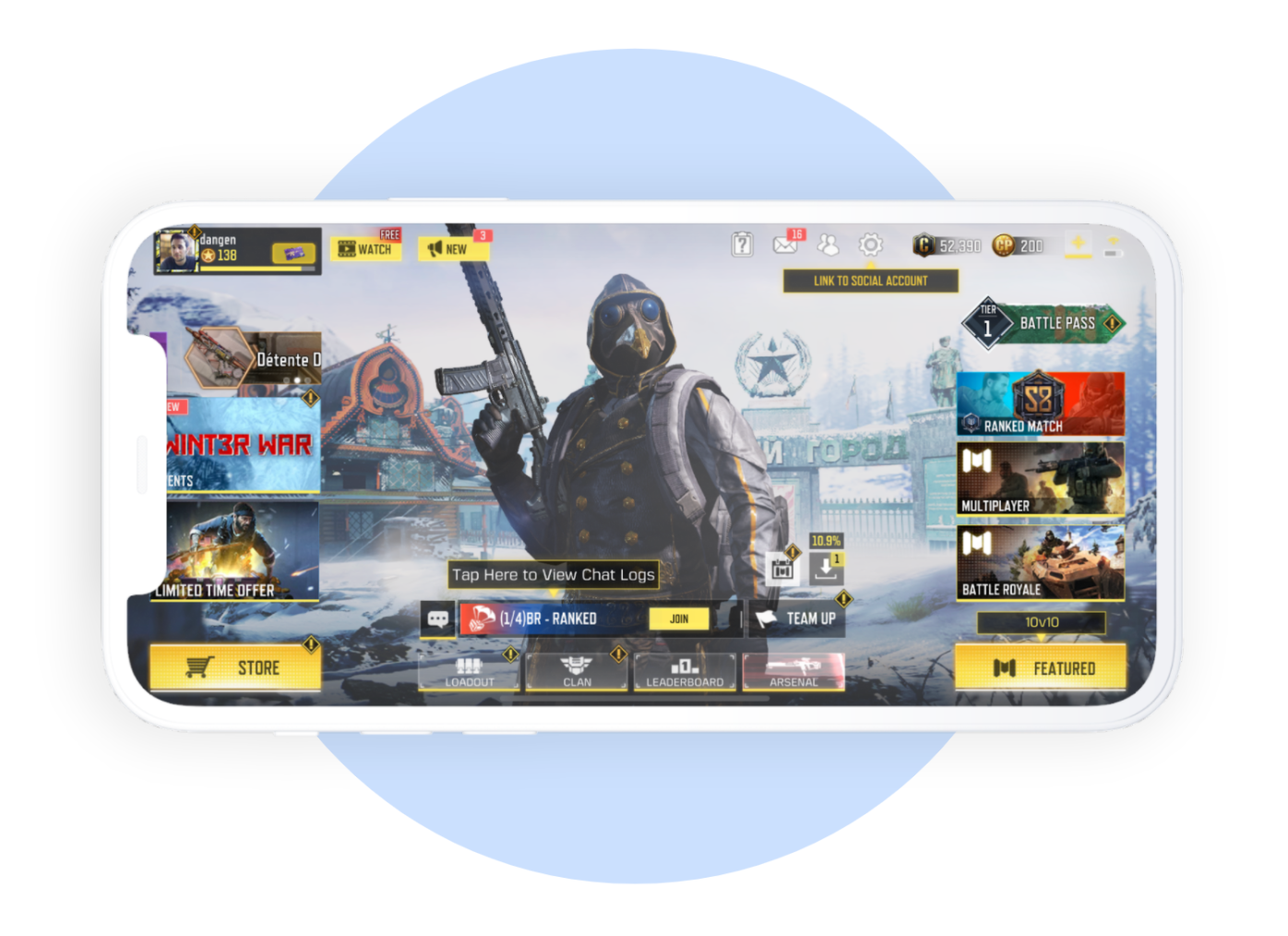 Consider the role ads play in your game

To get started with ads for your mobile game, first adjust your perception of the monetization strategy. With free-to-play games, players are unlikely to express concern about ads because they didn’t pay for the game in the first place - gamers understand that developers need to monetize somehow. In fact, 73% of gamers are happy with the ad-funded model of games and 62% of players said they ‘always or sometimes’ choose to watch a video ad to receive an in-game reward if they’re given the chance, according to Facebook Audience Network. For players who are unwilling to make in-app purchases, ads are a great way to improve engagement and retention.

Considering you’ll be adding ads to a game that previously existed without them, you’ll need to think carefully about your placement strategy. Interstitial ads are full screen ad units and are system-initiated, meaning that you, as the app developer, decide when the ads will appear and how often. Console first players have always played your game without ads, so it's best to not show interstitials to users on their first day using the app. Once you do start introducing interstitials, show them at natural pauses in gameplay so they’re not interruptive, such as at the end of a level or after winning a fight.

Rewarded videos, on the other hand, are user-initiated, meaning users make an intentional decision to engage with a video or playable ad in return for receiving a reward. This means you need to insert a clear traffic driver that provides access to the ads. Because rewarded video doesn’t disrupt gameplay, start showing these traffic drivers immediately after a user installs your app. While ​​the homepage is a good starting point, offering rewarded videos at natural pain points, for instance when the user runs out of lives or needs a certain weapon to beat a level, is a great way to engage players.

Make sure to A/B test your placement strategy often to figure out the winning formula for your specific app. With a solid monetization strategy, there are some technical processes to address.

Pay attention to the game’s mechanics

Adapting a game for mobile requires time, resources, and knowledge. It’s a complex process, but the stumbling blocks are possible to overcome with a well-equipped team of developers, project managers, designers, etc. That’s why assembling a capable team is a key step.

Once you have a solid team, you’ll need to either rewrite the code entirely or convert sections of it separately. After all, the tools, software, and language developers used to create the original game on console won’t match the requirements of the mobile platform. It's also unlikely that your game will achieve the same performance on mobile as it did on console - the goal is to find a balance between good performance and quality visuals, while providing a gaming experience as similar to the original as possible.

You also have to find a way to substitute the advanced console controls on mobile. Ultimately, users should be able to play the game on a touchscreen without any issues. If users are constantly struggling to understand the control mechanics, can’t figure out what to do quickly enough, or have too many controls to keep track of, your game won’t last on mobile. Keep in mind that true mobile gamers hold their phones with two hands and use their thumbs as controllers. In this stance, different areas of the phone will be harder to reach than others. 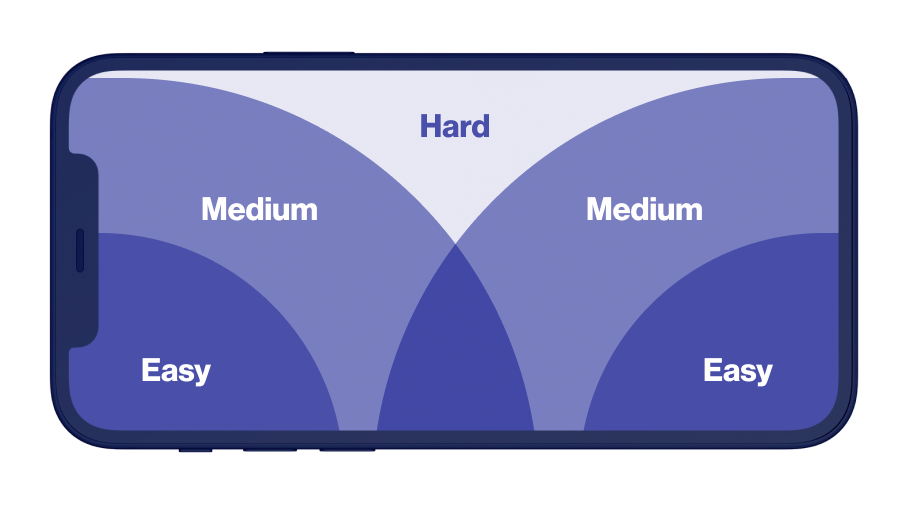 Overall, adapting your game for mobile takes significant planning and resources. Apart from adapting the code and controls, you also have to consider your monetization strategy and how you’ll please both console and mobile first users. Once the mechanics and monetization of your game are running smoothly on mobile, you’ll start seeing the new users flowing in.