How to A/B test your subscription app’s monetization strategy 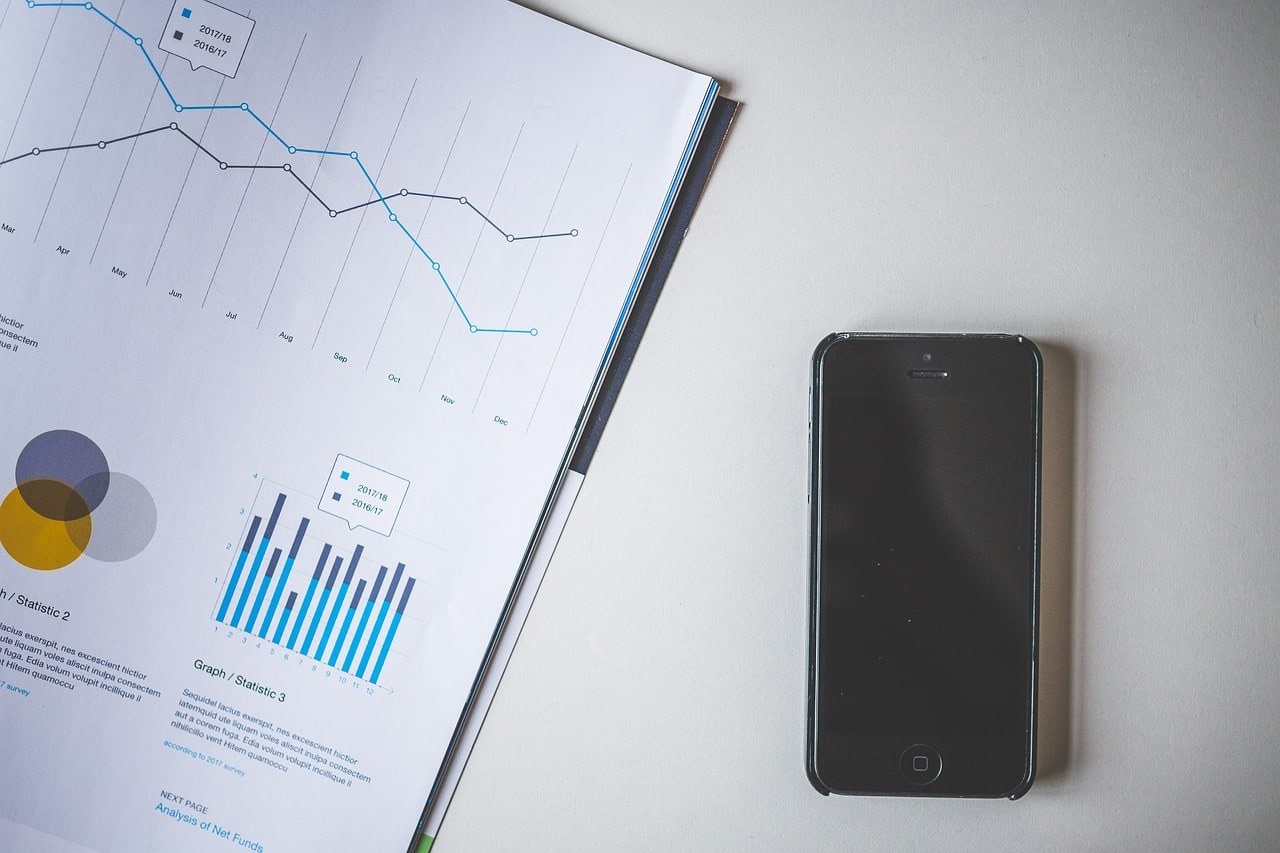 The apps in the top 200 on the app store manage to earn around $82,500 on a daily basis according to Tekrevol. However, according to that same article, daily revenue drops down to $3,500 for the top 800 apps. That’s why optimizing your app’s monetization strategy from the beginning is important to bring in the big bucks. But how can you be sure of what works best?

We often see that developers start off designing their app’s monetization strategy by imitating other successful apps from the same category. While this is valuable at first, there can be many fundamental differences between apps within the same app categories, such as target audiences or geographical location, that make full imitation unsuccessful. Just because the market leader in your app category offers a three-day free trial for subscriptions doesn’t mean it’s right for your audience.

A/B testing is far more impactful than imitation. A/B testing will give you statistical confidence in knowing what features improve your revenue, eliminating any guesswork that imitation may have. Running strong A/B tests that have a clear vision and will bring value to your app, you can optimize engagement for revenue and get a better understanding of your audience. That said, be careful to not over-test and spend time and resources on tests that won’t bring you value in the long run. 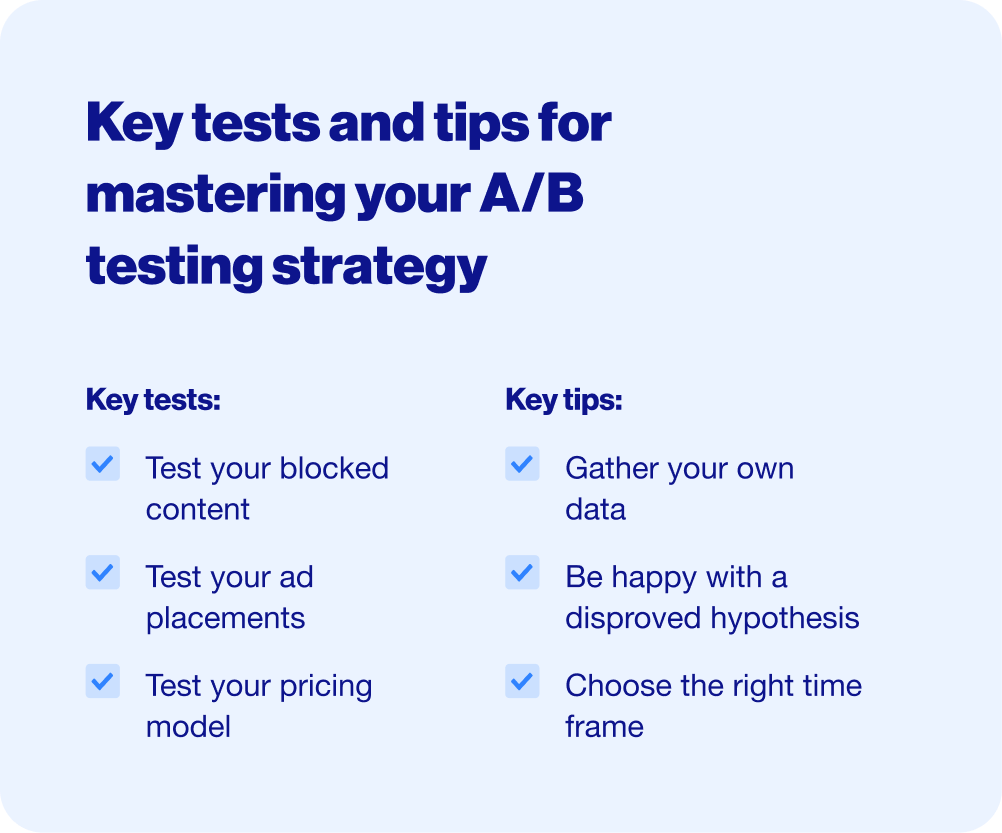 Here are some key tests to help your app bring in more revenue.

When running these tests, it’s important to try and get an understanding of long term success. But with user lifetime hard to identify in apps, these tests are a good place to start.

To get started, look at the engagement rates of different features and test how those features perform behind the subscription wall. While you may hypothesize that putting the most popular content behind the subscription wall will improve conversions, doing so could end up pushing loyal users out of your app, increasing churn. To be sure, run an A/B test and keep an eye on retention and revenue.

Testing your premium content and what features are most effective behind the subscription wall is important to keeping users engaged in your app and converting them to subscribers.

Testing the types of ads you show and where in the funnel you show them is also important to optimizing your monetization strategy. When adding a new ad placement into your app, your goal is to maximize ARPU without harming retention and hurting the in-app economy. Keep in mind that a placement you hadn’t thought about before could end up significantly boosting performance.

Consider whether you’ll implement user-initiated ad units like rewarded video and offerwall or display ad units like interstitials and banners, or both. Ultimately, different ad units appeal to different types of users, so having a mix of multiple ad units is the best way to monetize the widest audience.

Looking at an app that uses the ironSource platform, a prominent lifestyle app started testing ad placements for the first time to improve LTV and drive more revenue. While they started out implementing only rewarded placements like rewarded video and offerwall, through A/B testing, they soon realized that implementing interstitials increased their ARPDAU and eCPM significantly. Ultimately, while one ad unit can seem like the most effective way to increase subscribers, through A/B testing, you may find that others are just as, if not more, effective.

If you do choose to include rewarded ad units, you’ll need to test the rewards you’re offering to ensure you’re improving conversions. For some apps, it’s best to offer users a taste of premium content. For other apps, it may be more impactful to offer virtual currency that users can spend however they want. Each audience is going to respond to rewarded elements differently, and it’s important to test the reward to ensure you’re using these revenue drivers effectively.

To ensure you’re getting the most revenue out of each user, it's important to put resources towards designing the best pricing model. Your ultimate goal is to convert users to subscribers, and you’re leaving money on the table if you’re not A/B testing your subscription prices and time frames.

This means finding the optimized combination between the length of your subscription periods  (weekly, monthly, or yearly) and the cost of the subscription. To measure the impact of your pricing model, look at the LTV of each subscription time frame. This way, you’ll see the effect of the pricing model you’re testing in the long run.

Part of testing your pricing strategy includes testing the impact of offering a free trial, especially considering there are both pros and cons for this strategy - without a free trial option, the potential for churn is higher, but with a free trial, the subscription rate could drop. A/B testing is the only surefire way to determine how your long-term revenue will be impacted with this strategy.

Testing the placement of the free trial is also incredibly important to long term success - you can offer the free trial as part of the paywall itself, adjust the time frame of the trial, allow users to extend their free trial, or even test when to ask for credit card information. Ultimately, users are going to behave differently to free trials when it comes to apps, so it’s important to not make any preliminary judgements.

How to run a successful A/B test

You want to set yourself up for success from day one to see optimal results over time and improve your KPIs. Here are some tips for running a successful A/B test.

Gather your own data

Start by gathering data on your performance, such as number of downloads and where users are spending the most time. With performance being subjective - a social media app is going to have many more downloads than a subscription based photo editing app - it’s crucial that you develop your own data rather than do research into the average performance of the category you’re in.

With this granular data, you can have accurate benchmarks to measure your app’s overall monetary success against, which will help you formulate an A/B test to reach those goals. For instance, time spent is a crucial metric for social apps. Conversion rates, on the other hand, are important for e-commerce and subscription based apps.

Be happy with a disproved hypothesis

Just as you would in a traditional research study, formulate a hypothesis to serve as the basis of your A/B test. This comes down to analyzing the data and metrics you’ve collected and making observations based on user behavior, which will help inform your prediction. While your hypothesis is likely what you’re hoping will happen, this doesn’t mean the A/B test was a failure if disproved. On the contrary, a disproved hypothesis can be just as valuable.

With subscription based apps, your hypotheses may be focused on the cost of the subscription or the length of the subscription period. One app, for example, hypothesized that lowering the dollar amount of weekly subscriptions would increase subscription rates. Makes sense, right? While they disproved this hypothesis, the developers now know they don’t have to reduce their price to get more subscribers, saving them money and opening up doors to more A/B tests.

Imitating the time frame of other successful A/B tests isn’t going to make your current test more impactful. In fact, testing for a time frame that makes sense for the metric you’re looking at is vital in ensuring your results aren’t confusing or skewed.

A/B testing is a way to reduce uncertainty of what will work for your app and make great business decisions based on data, making it a stronger method than imitation. While this guide is meant to help you get started, with all of the moving parts, it may be beneficial to use A/B testing tools like the ones by ironSource.