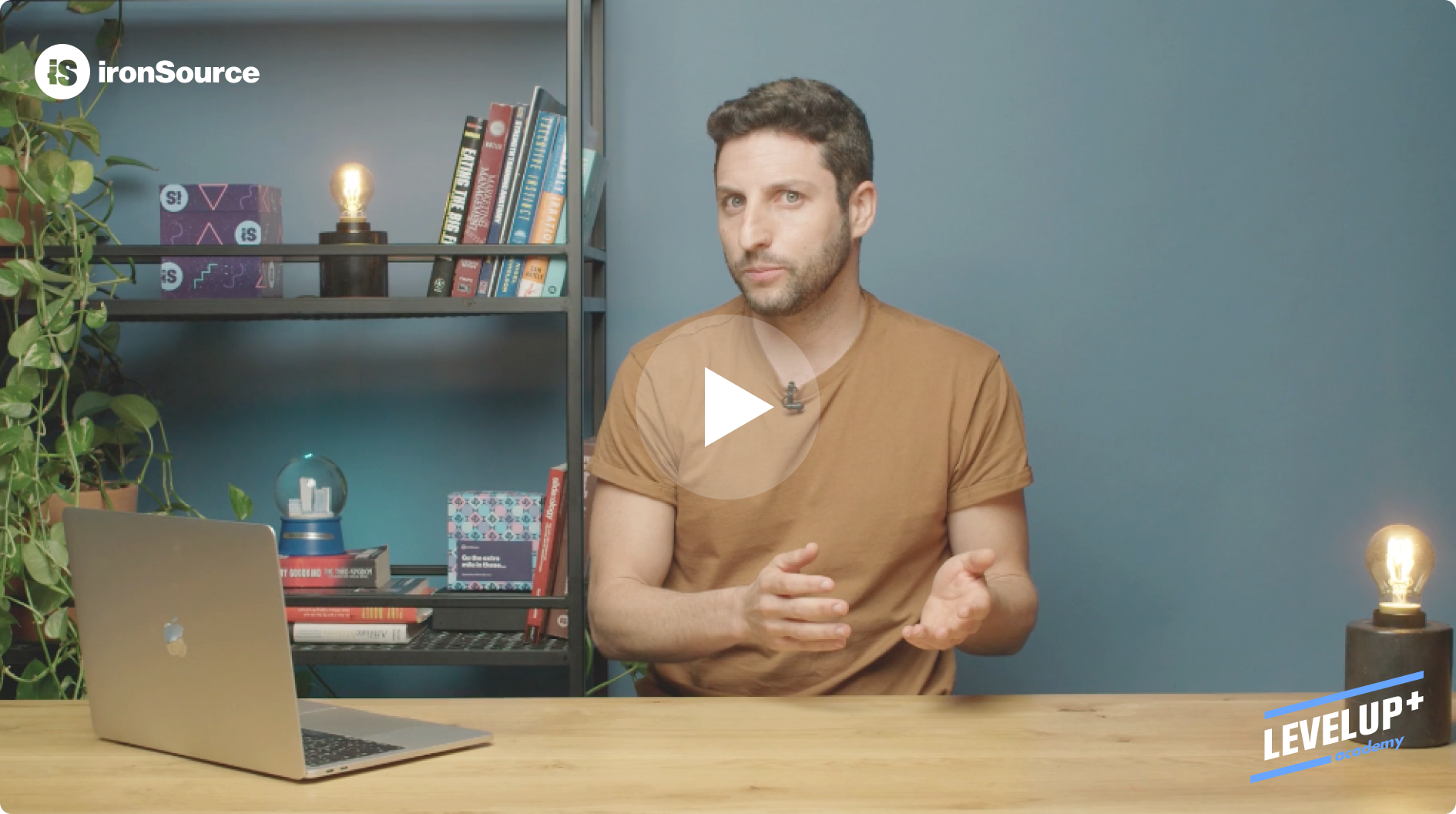 Last class, you got acquainted with the key industry technologies for game growth. Now it’s time to dive a little deeper into the world of mobile game monetization. In this class, we’ll discuss the key approaches to monetization, like ads, IAPs, and hybrid models, and explain key monetization terms, from ARPDAU to eCPM – and what they mean for your game.

Hey! I’m Miri from ironSource and in this video I’ll be running you through the fundamentals of mobile game monetization.

Spending time creating a strong monetization strategy can make the difference between being able to drive revenue from your game, and make a living from it.

Until 2012, the most common revenue model was the pay-to-play: Users would spend a dollar or two to play now iconic games like ‘Angry Birds’, ‘Doodle Jump’, and ‘Cut the Rope’.

But then along came the free-to-play or “freemium” model, which revolutionized the industry. Now, most games are free to download and play – and developers make money thanks to a variety of monetization methods – with the two most common being: in-app purchases and ads.

So what kind of in-app purchases or ads can you put in your game to make money? And how should you incorporate them?

In-app purchases, or IAPs, cover all kinds of things: from “micro-transactions” like new skins for characters, to Battle Passes, which are like time-limited subscriptions that give players access to special features, bonuses, and seasonal events. You might know Fortnite as the game that made this popular.

There are lots of other types of IAP mechanics that I recommend you check out, which don’t only boost your revenue but also boost player engagement and retention. We’ll put a link to a useful article all about this in the Additional Resources section, so be sure to take a look.

In-game stores where you show all your in-app purchases can offer a wide range of offers that cater to different players and different budgets. As you probably can guess, only your MOST loyal and engaged users will spend money on IAPs – which is generally a small percentage of your user base.

So what do you do to monetize the rest of your users? This is where ads come into play. Ads let you make money from all your users – not just the small number who’ll spend money in your store. How does it work? Simple, you get paid for each ad you show to a user in your game.

You can put two main types of ads in your game: user-initiated and system-initiated.

User-initiated ads, like rewarded videos and offerwalls, can be super strategic for your overall monetization strategy. We’ll dive a lot deeper into these later on in the course, but for now you should know that these ad units are totally opt-in, meaning the user decides to engage with them – all you do is provide access at smart and valuable points in their game session, and set the right rewards.

These ads give users access to premium in-game content – FOR FREE – in return for engaging with an ad. You as the developer choose the in-game content, or ‘rewards’ your users receive, which could be 20 gold coins, or a new character upgrade.

These kinds of ads can actually add value to the user experience and be seamlessly integrated into your game’s core loop, so that they really feel like a native “feature” of your game, rather than an “ad” in a traditional sense. Think of them more like a way for a user to make a microtransaction in your app, but instead of money – they exchange their time or attention for in-game items or currency they want to access … so they can keep playing, and for longer.

For your less engaged users, who aren’t interested in spending money on IAPs or their time on rewarded videos or offerwalls, you can use system-initiated ads like interstitials and banners. You, as the developer, decides how often your users will see these ads, but because the user doesn’t decide to watch these ads, showing them too often can damage the user experience and hurt your retention.

So what do they look like? Interstitials take up the whole screen, and can be a static, video, or playable ad, while banners occupy a smaller space at the bottom or top of the screen.

We have classes later on that give you best practices and more in-depth insights for all of these types of ads – so make sure you check them out.

Goals of monetization: The metrics

Whether you’re using a mediation platform with strong reporting or a dedicated analytics service, you have to pay close attention to the data to see if your monetization strategy is working or not, and if it meets the KPIs – key performance indicators – that you’ve set. Not only do you need to track if your ads are driving a good amount of revenue, but you also have to keep an eye on how it’s impacting important metrics like retention.

Let’s talk about goals. The goal of your monetization strategy is to maximize LTV, or lifetime value. LTV is a prediction of the revenue a user generates over their entire “lifetime” using the app. Depending on the average lifetime of users in a given app, that could be 30 days or 3 years.

ARPU, which is average revenue per user, is also important. ARPU gives you a longer-term view for a certain “cohort maturity period” – for example, Day 7 ARPU would tell you how much revenue users generated in their first 7 days since installing your game.

In order to maximize LTV and ARPU, you need to monitor ARPDAU, which is the average revenue per daily active user, and retention. ARPDAU will tell you how day-to-day changes, like changing the cost of an in-app purchase or switching up an ad placement, are affecting your ARPU. It’s always measured in financial terms, like 13 cents ARPDAU.

Next up is eCPM – effective cost per mille or cost per thousand impressions. eCPM shows you how much money the ads in your game are making for you. You can use eCPM to compare and analyze how much money different ad networks or ad units are bringing you – for example your eCPM for rewarded video is $5 but for banners it’s $1.

The final two metrics you need to know are UR and ER, which stand for usage rate and engagement rate. Both metrics tell you how much of your monetization potential you’re reaching, or more simply – how well your ad monetization is working.

Engagement rate is the percentage of users who engage with ads in an app, and is particularly important for rewarded video ads. You could, for example, have a 70% engagement rate, meaning 70% of your users are engaging with your ads, while 30% aren’t. Any engagement rate that’s not close to 100% tells you that there’s potential for your monetization strategy to do even better. In other words, how good are you doing at monetizing the maximum amount of users?

That’s all for now. Now that you know why monetizing your app matters, the different approaches to monetization, and how to track your success, we’re going to dive into the other side of game growth in the next class – user acquisition. Thanks for tuning in!