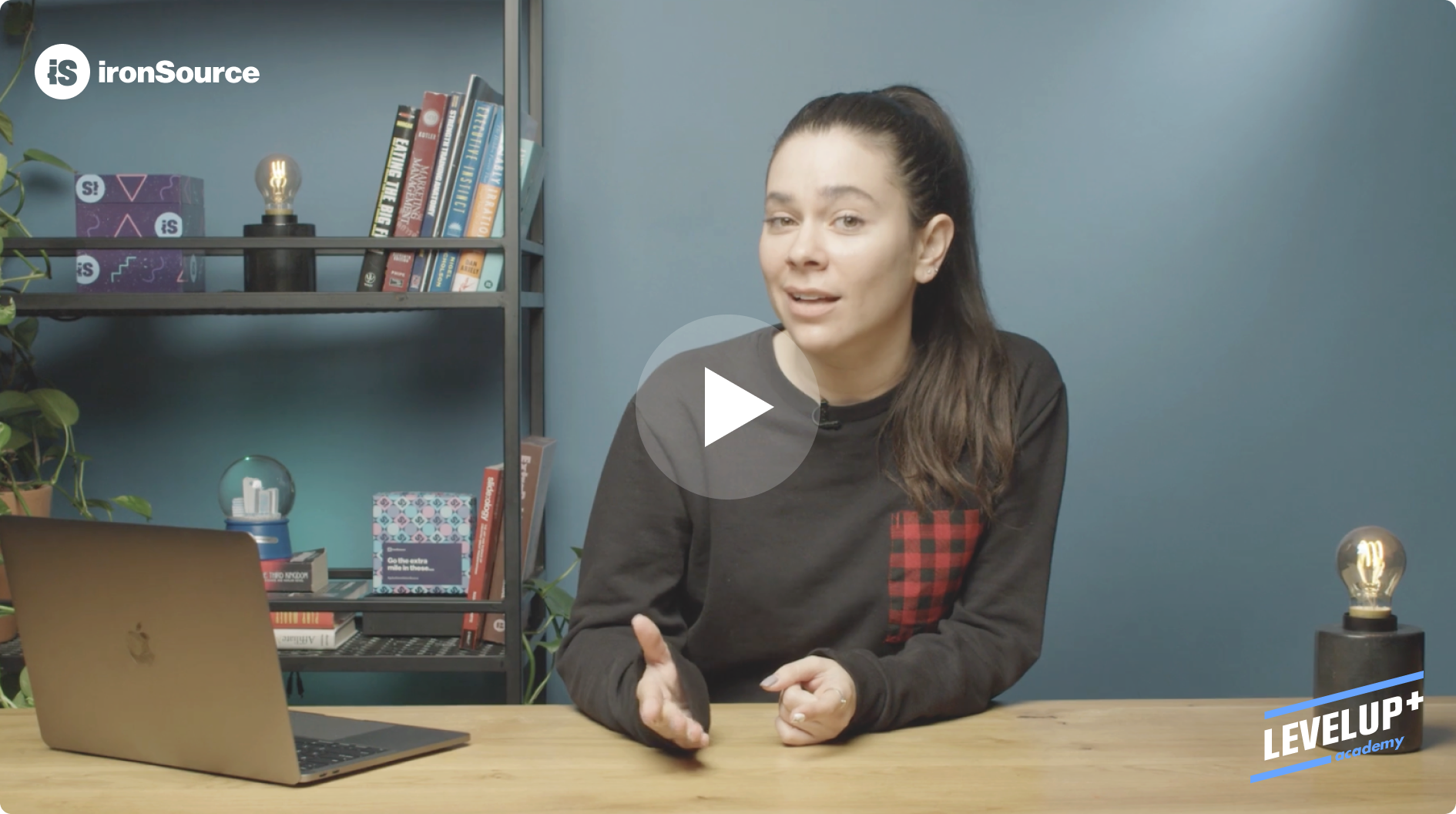 We touched on them in the last episode, but now it’s time to go deeper with your user-initiated ads. In this class, you’ll learn how to find the right placement and timing for your rewarded video and offerwall ads, how to set the right rewards, how and what to A/B test, and how to run multiple credit offers in your offerwall ads.

Hey! I’m Tomer from ironSource and in this video I’ll be taking you through best practices for offerwall and rewarded video ads that we’ve personally tried and tested with some of the best developers in the mobile gaming industry.

The magic of user initiated ads – which, remember, are completely opt-in – is that in addition to increasing your ad revenue, they can actually improve your game’s user experience, increase both retention AND session length, and even at times convert your non-paying users into paying users! But how do you do that? By the end of this video, you’ll know exactly how.

When it comes to keeping your players happy and maximizing revenue at the same time, there are a few vital things to keep in mind.

The first things you need to nail are the placement and timing of your user-initiated ad units – and by that i mean, where in the game you are providing your players access to these ads.

A great tip for identifying the best placements is to really put yourself in the shoes of your players: try playing a bunch of similar games in the market as well as your own, and make a note of what placements just feel right and add value to your experience.

Your whole placement strategy should center around your game loop, which is why thinking about ads from the early stages of game development is a big help.

In general, make sure to put rewarded video ads in a variety of locations throughout the game, always in natural places, with a clear and visible design.

Why the variety? Because all your players are different – some might be more motivated to watch a rewarded video after failing a level so they can keep playing, but others might prefer watching the ad on the homescreen to get more coins. The more users you can attract, the happier your users and the higher your revenue.

Rewarded video ads can also be placed at specific points in your game where you see users are dropping off. If you see that after level 12 there’s a big drop off – maybe it’s too hard, or players get bored – then you can use rewarded video ads to give them access to great boosts that encourage them to keep playing. Giving them the coins they need to go to the next level or a booster after they’ve run out of lives can keep them in the game longer – improving your game’s retention rate and session length.

For offerwalls, you should let players access the ads on the home screen, in your game’s store, in the stats bar, and at natural breaks in gameplay at times when they lack hard currency to complete an action.

Make sure that the traffic driver, AKA the call-to-action button, [screenshot of an offerwall and its traffic driver appear on screen] is always visible and easy to access, so users can use your offerwall even if they don’t know what it is at first.

Also, we should talk about capping – basically how many times in a single session a player can access a user-initiated ad. When it comes to rewarded video ads, don’t hold back – Because they’re not time consuming for players, they can rack up really high usage rates, which for you means really high ARPDAU. If you’re not familiar with the term usage rate, I’d recommend you go back to our Foundations of Game Growth course, where we introduce key monetization metrics.

Generally, you should give your players the option to engage with 6 or 7 of these ads in a single session – more than that runs the risk of causing “ad fatigue” and letting players progress too quickly. Less than that is just wasting potential uplifts in playtime, retention, and revenue.

At the end of the day, it’s the rewards that make offerwalls and rewarded videos so effective at boosting retention and ARPDAU, but … there’s no one-size-fits-all answer to the question you’re probably asking…”what the hell do I give my players?!”

For rewarded videos, we recommend giving players soft currency, which can be things like virtual coins or cash. Users can spend soft currency on items ranging from upgrades to new activities, and it should be available at multiple points in the game, like after mission completions, streaks, or daily challenges.

For offerwalls, it’s best to give hard currency rewards, which can be things like gems or diamonds. Hard-currency rewards are high value and given in small doses…And, unlike soft currency – aren’t easy to get during gameplay. The gems or diamonds can be used by the user after they complete the offerwall event, to unlock premium paid content from your in-game store or directly through the gameplay – like getting more lives or special skills.

Understanding soft and hard currency is a good starting point, but the question about setting the perfect reward goes a lot deeper. Remember – since all your users are different, you should have different rewards for different groups. This is where segmentation comes into play. Segmentation lets you give different rewards to different sets of players, so you can craft the best ad experience for everyone.

Mediation platforms let developers like you easily segment players according to things like age, device type, country, level reached, and if they’re payers or non-payers. Not using a mediation platform? You can also segment users with your own internal code.

So what kind of segmentations can you do?

One example is giving users who play less frequently bigger rewards to tease them into playing longer.

Or, you can give non-paying users exclusive in-app rewards in exchange for opting into a user-initiated ad – as a way of nudging them towards making an IAP. It increases the likelihood of eventually convincing them that in-game content is worth paying real money for.

Location-based personalization is also smart. For instance, for countries like Brazil or India where scale is huge but usually the amount of paying users is very small – you can be less cautious with your offerwall placements. That’s because there’s a smaller risk of IAP cannibalization.

Also remember to adapt the reward based on the player’s progress in the game: for users on higher levels, the reward should also be higher to reflect their progress and to keep the engagement rate up. 20 coins might be an amazing reward for players on level 3, but for those on level 50 it will probably be worthless.

Ultimately, it will take plenty of A/B testing to find the perfect reward, which brings us to our next best practice.

A/B testing should be at the heart of your overall ad monetization strategy. In the next few minutes, I’ll explain the most important things for you to A/B test to make sure your ads are creating the best user experience and the most revenue for you.

Seeing as we were just talking about rewards, let’s start here. When it comes to rewards, the most important thing you need to test is the impact on your IAPs…you want to avoid IAP cannibalization. Are you inadvertently decreasing your IAP revenue by giving players too much premium content through your user-initiated ad rewards? If so, you need to make some changes.

To avoid IAP cannibalization, make sure your rewards aren’t too generous, but still valuable enough to watch a video or complete an event for.

To find that sweet spot where you maximize your ARPDAU from user-initiated ads without having any negative impact on IAP revenue, you’ll need to run a bunch of A/B tests and let the data guide you.

But A/B testing to find the right reward is just one out of many things you need to test in your overall ad strategy.

A/B testing pacing and capping is also super important and can make a big difference to your revenue. We explained these terms in our Foundations to Game Growth course.

Try experimenting with a higher frequency of rewarded video ads and allow users to access them at more “pain points” throughout the gameplay.

If usage rates and engagement rates go up with your test group – and as a result your ad revenue too – then you should roll out this change to all your users. Just make sure you’re not integrating too many placements – this can cause “ad fatigue” and potentially IAP cannibalization. So make sure you’re looking at overall ARPDAU – both IAP and ads – when deciding if your A/B has been a success or not.

If there is a small amount of cannibalization but the overall ARPDAU of your game is increasing, then that’s fine and you can roll out your new RV strategy to the rest of your users.

You can also run A/B tests for the visual aspect of your ad placements. For offerwalls, you can tinker with the traffic driver button – maybe change the colors you use, or the messaging. And the same goes for your rewarded video placements – you can experiment with the interface and how you frame the offer. Editing small details like these can have surprisingly big effects.

These promotions increase engagement both for users who are already familiar with the ad unit as well as new offerwall users, and maximize overall revenue when executed smartly.

You can run these special offers up to twice a month on weekends or holidays where traffic will be high.

How do you maximize engagement for these offers? First, make sure the offers are super visible – make the call-to-action button stand out, and promote the offer in your game with pop up notifications and placements in the game store.

Another great way to maximize engagement for these offers, and for your user-initiated ads in general, is to make them time-sensitive – add a timer next to the placement which counts down.

Once you’ve mastered all of this, the next step is to optimize your activities. Keep up to date with industry benchmarks specifically the usage and engagement rates for your genre. And continue A/B testing all the different things we talked about in this episode, closely tracking the impact on ARPDAU and retention.

What kind of games work best with an offerwall?