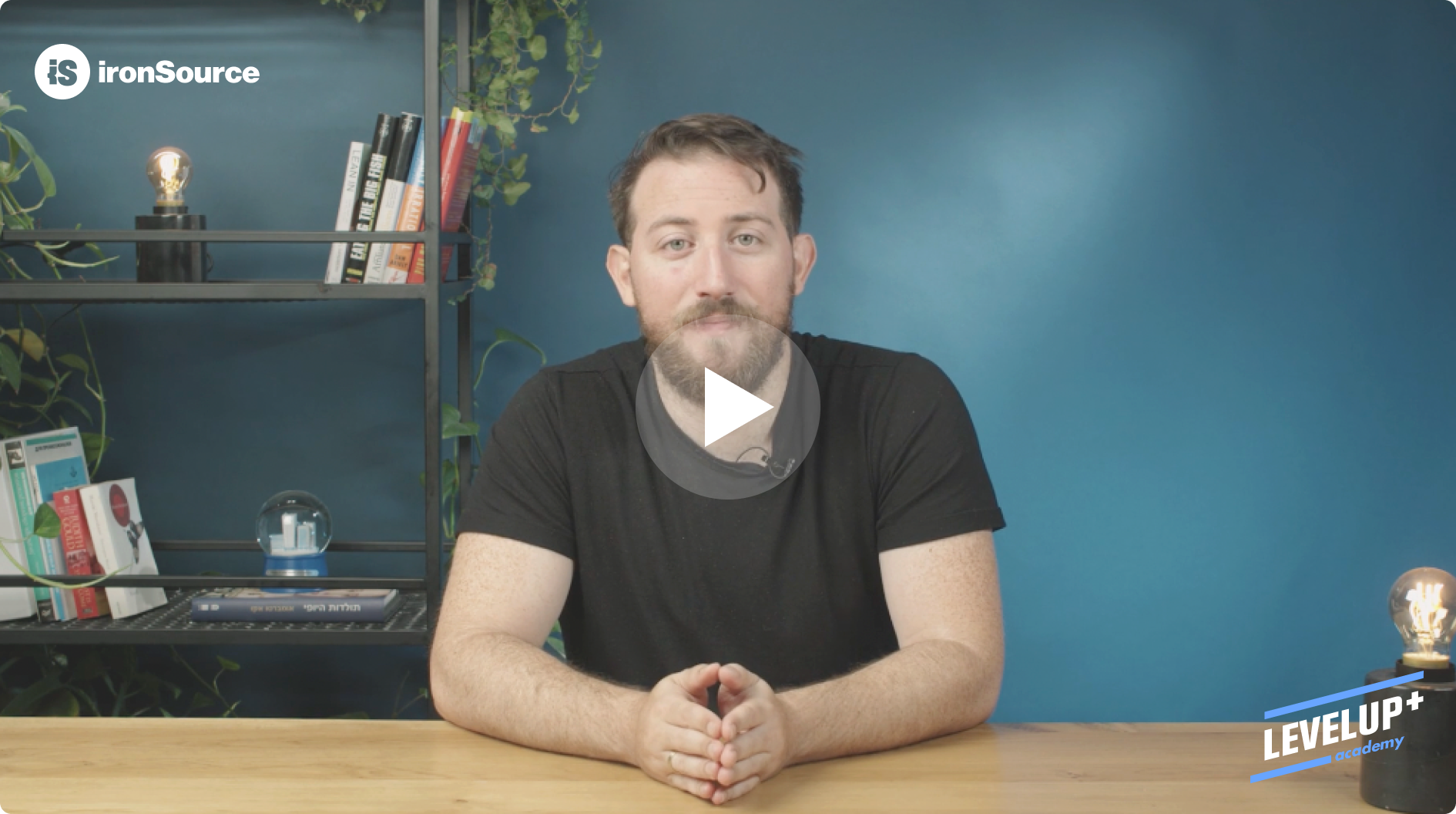 How to place interstitial ads the right way

In a previous course about monetization, we covered the basics of rewarded video. This class, we’re diving deeper into specifics – showing you how to actually place rewarded video ads into your game to increase revenue and ensure a great user experience. You’ll learn 8 must-have placements and tips and examples for setting them up for success.

I’m Adam Frimer from ironSource, and by the end of this session you’re going to understand why rewarded video ads are key for your monetization strategy and how to implement them.

Let’s quickly run through the fundamentals of rewarded video ads.

Rewarded videos are user-initiated ads, meaning users make an intentional decision to engage with the ad in return for receiving a reward.

In addition to generating revenue for your game, rewarded videos are a great tool for increasing retention rates as well. As you can see in the chart, the more rewarded videos users watch, the higher your ARPDAU and your retention is.

That’s because they encourage your users to play for longer. Basically it gives them rewards like power ups and boosters that let them keep playing – for example, at points where they’re stuck.

So rather than spending money to progress in the game, users spend their time watching a video ad. And because the user CHOOSES to engage with the ad, the ads generally have a very positive user experience.

Not to mention – advertisers usually pay more for user-initiated ads, because they perform really well – the opt-in UX means users stay happy throughout the ad experience and more open to their messaging. Which means more revenue for you.

Remember – the metrics to look out for to make sure you’re hitting your KPIs are: engagement rate, usage rate, and ARPDAU. If you need a refresher on what those KPIs are, check out the previous course that covers just that.

The importance of good placement

So why is it important to dedicate time to creating a well-thought out placement strategy for your rewarded videos?

There’s two reasons for that – first, with good placements, your rewarded videos will be highly visible and accessible, and you’ll maximize engagement and usage rates, and in turn meet your ad revenue goals.

Second, a good placement strategy is also key to providing the best user experience. By that I mean – it’s not enough to make your rewarded video ads just visible – you need to make them visible in the right situations, when the rewards will be the most valuable.

Before we dive into some best practices for implementing rewarded videos, let’s go over a few key points.

You need to know your audience and understand what motivates them. Ultimately, putting yourself in their shoes will help you provide the most valuable placements with the best user experience. If you focus on that, the KPIs like high engagement rates, usage rates, and ARPDAU will come naturally.

It’s just as important to research what your competitors are doing and your genre’s benchmarks for engagement and usage rates. That way, you have a reference point to measure whether your placements are performing well or not.

Check out our benchmarks eBook in the Additional Resources section of the page – there you’ll find up-to-date ad monetization benchmarks across multiple genres, so you can compare and contrast your own performance.

Finally, like with your overall growth strategy, A/B testing is king. Use insights from your mediation platform to help you understand which placements perform the best. Then hone in on those, and focus on really squeezing the lemon – optimizing every aspect of the placement.

When we’re talking about placements for rewarded video, we can divide it into two groups – classic placements and innovative placements. Classics are placements that every developer should have in their toolkit, and the innovative ones are more game specific.

We’ll also talk about the rewards that go with each placement: like offering the ability to unlock in-game content and currencies, progression rewards, surprises, or even bonus levels. In order to appeal to a larger audience, it’s important to offer multiple types of rewards.

At the end of a level

A very standard rewarded video placement that nearly every game developer uses is to show one at the end of a level. Here, the rewarded videos can provide monetary or progression-based value to users. What does that mean exactly?

For example….When a user completes a level and earns a prize, you can offer them the opportunity to double or triple its value by watching a rewarded video ad. For many users, this will be a no-brainer.

Or, when a user fails a level, you can use a progression-based placement that lets them keep playing in exchange for watching a rewarded video. You could provide users an extra life to retry the level, or simply let them skip to the next one.

To increase the engagement rates for these placements, make it immediately clear what the reward is, for instance 3-X the amount of coins. You can also add a countdown to give users a sense of FOMO if they don’t engage (whisper) The fear of missing out! – and as always, you can test this out through A/B testing.

You can also use more unpredictable end-of-level placements, for instance offering users a chance to spin a wheel full of prizes, or even opening a simple “surprise box”.

Placing a traffic driver on the homepage of your game is another classic strategy. Your traffic driver is the button users need to engage with to open up the rewarded video ad.

By placing a traffic driver on the homepage of your game, users can engage with a rewarded video whenever they want, and not just after they fail a level.

Use this placement to reward users with exciting upgrades: if you have a first-person shooter game, try giving users the chance to unlock a new weapon or extra health points.

Now that we’ve talked about the more classic rewarded video placements, let’s talk about some more innovative ones that you should experiment with to help you increase revenue and retention even more.

For starters – You can place a traffic driver that flies across the screen in the middle of a level. Look! There goes one now!

These are especially effective because they create a sense of urgency and FOMO – users see that there’s limited time to tap on the offer because it floats off screen. That’s why these placements can achieve high engagement and usage rates.

They’re also particularly suitable for idle games, where the distraction doesn’t really matter. If you have a shooter game or any other game that requires users to concentrate and actively play, then there are probably better placements for you.

Remember I told you about progression-based rewards? Rewarded videos that offer a way to skip levels are a great example – they let players advance to the next level whenever they want, saving them time and potentially frustration.

This increases engagement with your rewarded videos and gives players a better experience – after all, no one enjoys failing.

It’s best to add a “SKIP” button in the top right corner of the screen, where your eyes naturally wander to anyways. You can try to use an eye-catching color to increase its visibility.

Speed up a reward

If your users are earning XP or experience points to unlock various in-game rewards, whether that’s part of the core loop or the meta game, you can help them speed up this process through rewarded videos.

Take this example: After a user completed a task and got a notification that they’ve received their XP, you can add a traffic driver offering them to add an extra boost that accelerates their progression even further.

This is a great example of using rewarded video as a seamless tool to really compliment game features and provide value to users.

Chest boxes that integrate rewarded videos are a great way to combine progression mechanics with unpredictability. For example they can appear randomly every 3 or 4 levels. With chest boxes, users accumulate keys throughout each level and once they have a certain number of keys, they can unlock a chest box for a surprise gift.

Last but not least, you can offer users bonus levels and special content that can only be unlocked by watching a rewarded video. It’s best to show these right after a user completes a milestone, so they’ll be ready to tackle a premium level or challenge.

We’ve seen these placements work wonders, with engagement rates reaching 35 per cent and LTVs increasing by 10 per cent.

Don’t forget to use a pop-up with a teaser for the level, so users can get a glimpse into the bonus content. This will help you get the most engagement and usage for your ad placement. And lastly, make sure you A/B test which visual assets or graphics drive the best results.

Multiple videos in a row

Instead of showing one rewarded video at a time, you can also show a strip of multiple videos that users need to watch in a row. You should offer a small reward for each one, and also test out adding a roulette or spinning wheel with a generous prize at the end as a bonus to the user.

This can help encourage them to get to the end of the multiple rewarded video placement and ensures they end on a happy note. To help users better understand there are still more videos to watch, while giving them incentive to watch many in a row, add a checkmark next to every video they complete.

Make sure that the rewarded video provider you’re working with can guarantee zero latency, like ironSource. You want to make sure the next ad is always available and ready to play – otherwise you risk damaging your game’s user experience.

Using a combination of these placements, you’ll be on the right track to maximizing your KPIs like engagement rates, usage rates, and ARPDAU.

How to level up your rewarded video monetization