Getting started with user acquisition 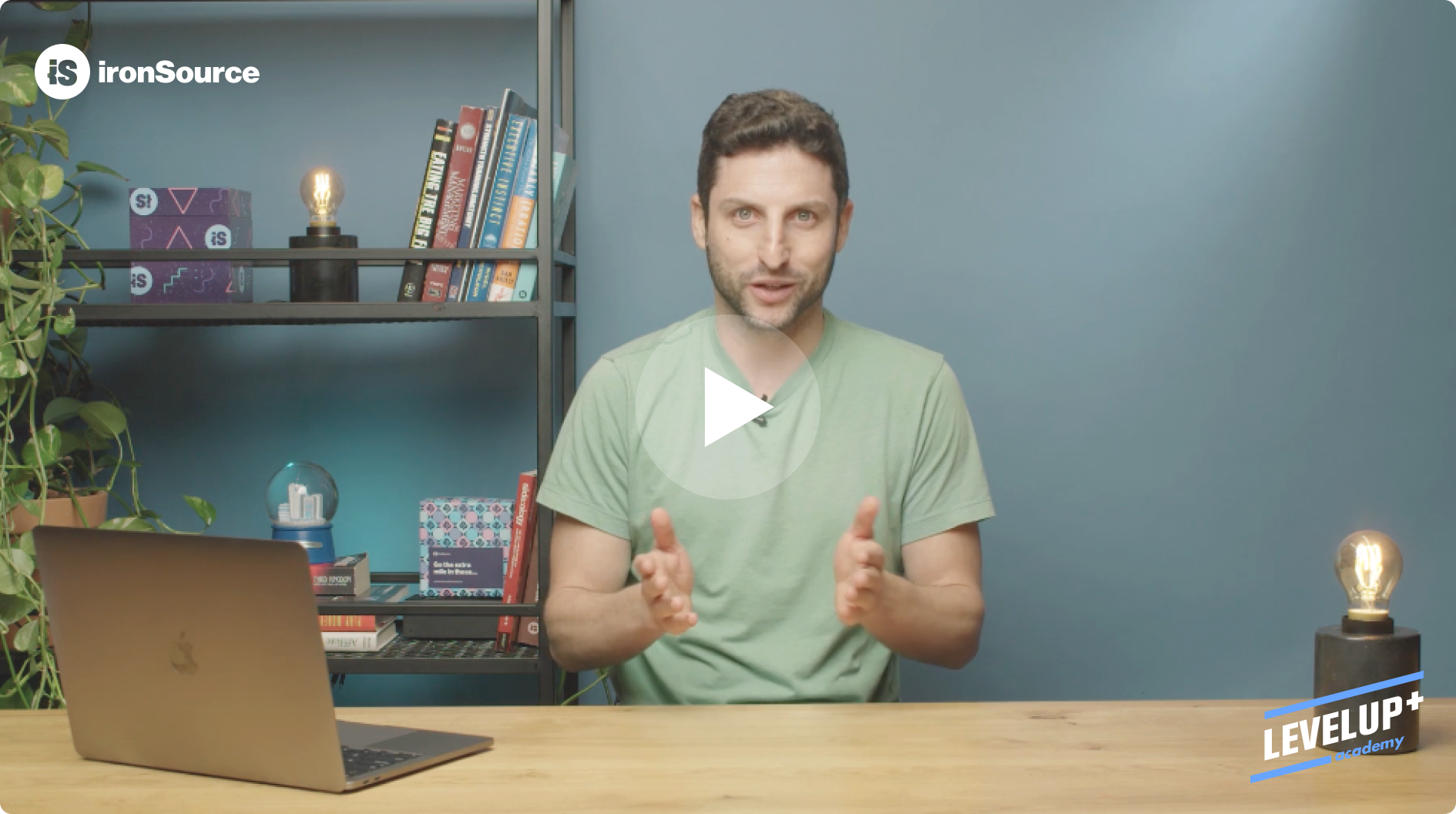 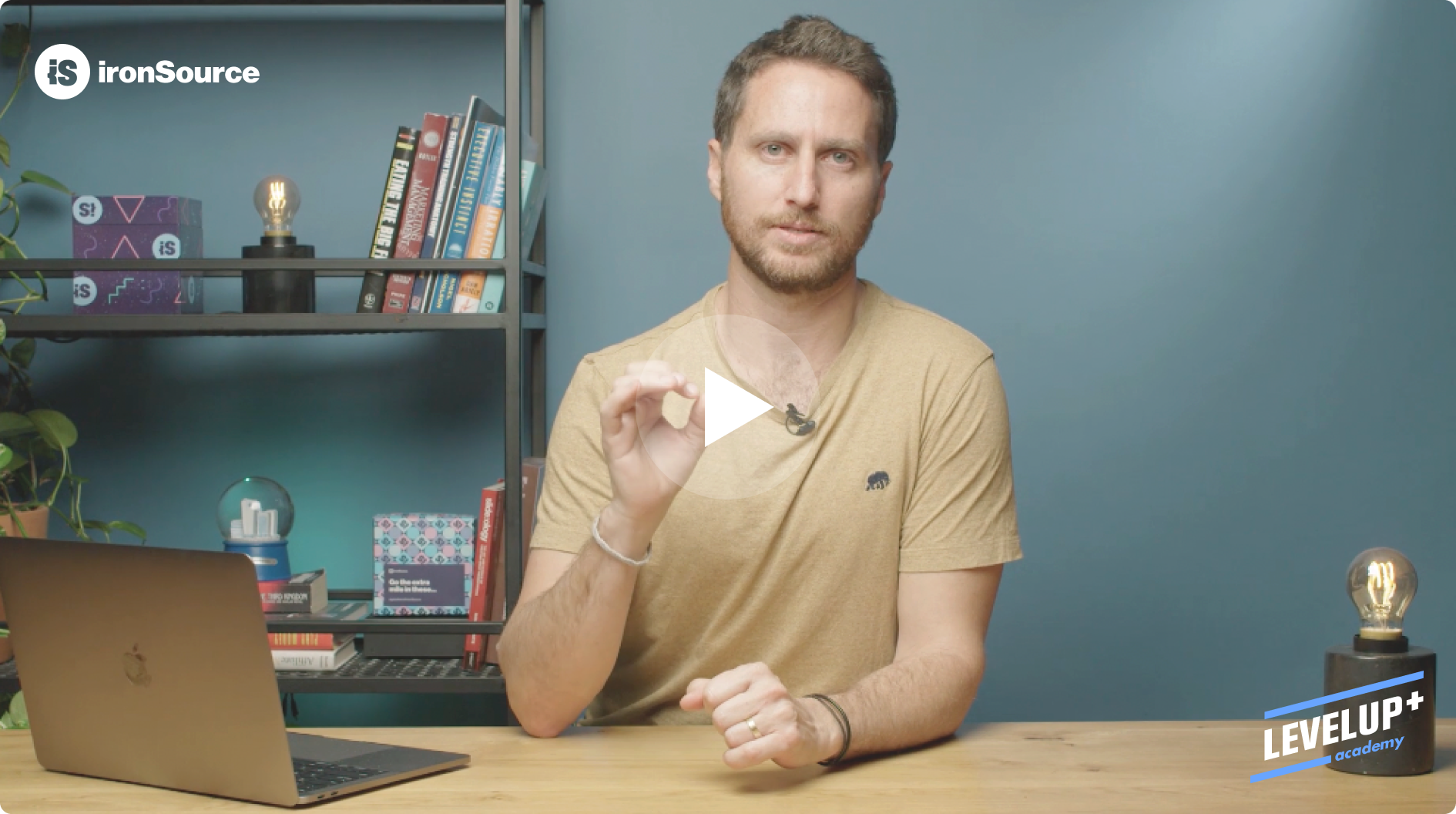 The world of ad creatives and creative optimization

Class 04 Growing your user base

Getting started with user acquisition

By now we’ve covered the foundations. Now it’s time to take points up a notch, and unpack the most important information you need to know to actually start acquiring users for your mobile game. In this class, we explain the importance of a diverse media strategy, share 6 points to consider when choosing an ad network, and examine the impact of eCPM on UA campaigns.

Hey guys, I’m Assaf from ironSource. This episode, we’re going to talk about how to get started with paid user acquisition campaigns – and why you should.

In today’s app marketplace, relying on organic installs just isn’t enough for scaling an app. That’s because, these days, the app stores are incredibly crowded. There are millions of apps and games in both the Apple App Store and Google Play Store … How is anyone going to find and install your game?

The answer … is user acquisition. In the rest of this episode, we’re going to be focusing on paid user acquisition campaigns and what you need to know to start building your UA strategy.

There are a lot of different types of media sources out there – you have ad networks like ironSource; social media sources; social media influencers; alternative channels like device preloads; search channels; and demand side platforms.

You’ve probably already experimented with some media sources like Facebook and Instagram. Most game developers begin their very first UA campaigns on these kinds of sources because they’re easy to set up and convenient to use.

But a good UA strategy has lots of campaigns running on a lot of different media sources at the same time. That means not narrowing yourself to just social or search channels, but also running on ad networks and other channels, too.

Because ironSource is an ad network and that’s where most of our expertise lies, we’re going to spend the rest of the next few episodes talking about starting and running successful UA campaigns with ad networks, specifically.

There are a lot of ad networks out there to choose from. The good thing is, you can choose to advertise with a lot – all at the same time.

It’s always a good idea to diversify your user acquisition strategy and advertise your game on a whole bunch of different ad networks. It’s the best way to increase scale – more networks mean more users – and also makes sure you’re reaching as many types of users as possible.

6 things to consider when choosing an ad network

First, does the ad network have a niche? And does it match what you need? For example, some ad networks have access to a lot of users and apps in certain locations, like Russia or China. While other ad networks are good for certain age groups – like Gen Z or Millennials. It all depends on what type of users you’re targeting.

Second, what’s the quality of the users the ad network can bring you? Are they users who will just install your game and delete it an hour later? Or users who will stick around and go on to watch ads or make an in-app purchase? There are tons of rankings and indexes which can give you a better idea of each ad network’s quality score.

Third, how much reach does the ad network have? Do they have access to 5 million daily active users or 500 million? You want to make sure that a few of the ad networks you’re working with can access a high volume of users around the world.

Next, how easy is it to start running a campaign with the network? Is there a platform where you can do it all yourself? Or do you have to go through an account manager?

That brings us to our next point – what other tools does the ad network offer? Do they have additional solutions you can use to improve your performance? Like an automated big optimization tool? Is there a good support team who can help you navigate your first campaign? The more robust an ad network’s offering is, the more likely your campaigns are in good hands.

And finally – what’s the reporting like? And how transparent is the ad network with sharing important insights and information? With more data, and specifically more granular data, you’re better equipped to make smarter decisions later on when it’s time to analyze your campaign’s performance – so make sure the ad network you choose is ready to be open with you.

What’s eCPM and how does it impact UA campaigns?

Let’s talk a bit about how ad networks prioritize ad campaigns. Like any ad platform, ad networks are all about yield optimization – they’ll favor campaigns that generate more revenue for them and their monetization partners.

So if the ad network sees good performance from your campaign, it’ll prioritize it inside its ad serving logic and make sure that the campaign gets an even higher amount of impressions and scale.

How do networks measure ‘good performance’? We talked a bit about it in previous episodes, but to recap – they look at your campaign’s eCPM – which you can calculate by multiplying IPM (how many installs the campaign is generating) by CPI (how much you’re willing to spend per install). The higher your campaign’s eCPM, the higher a network’s algorithm will prioritize your campaign in its ad serving logic.

Because eCPM is the go-to metric here, we say that it “represents your buying power” inside an ad network. Naturally – a campaign with a high eCPM will give you more power to buy even more users. That’s because, by prioritizing your campaign, the ad network is going to give it a lot of impressions and show it to loads of users, giving you scale.

One final note before I leave you – UA campaigns on ad networks can be more expensive than other sources. But if you don’t have the budget to spend on a UA campaign right now, there’s still a lot you can do to get the word out. There’s social media channels, email marketing, and even press outreach. Try reaching out to industry publications like PocketGamer to feature you, or even YouTube influencers to review your game. You can also share your game on developer groups and forums on Reddit and Telegram. Then once you’ve started gaining traction and making money by showing users ads, you can build up the budget to begin paid UA.

Getting started with user acquisition for mobile apps

Why game growth is a loop and not a funnel