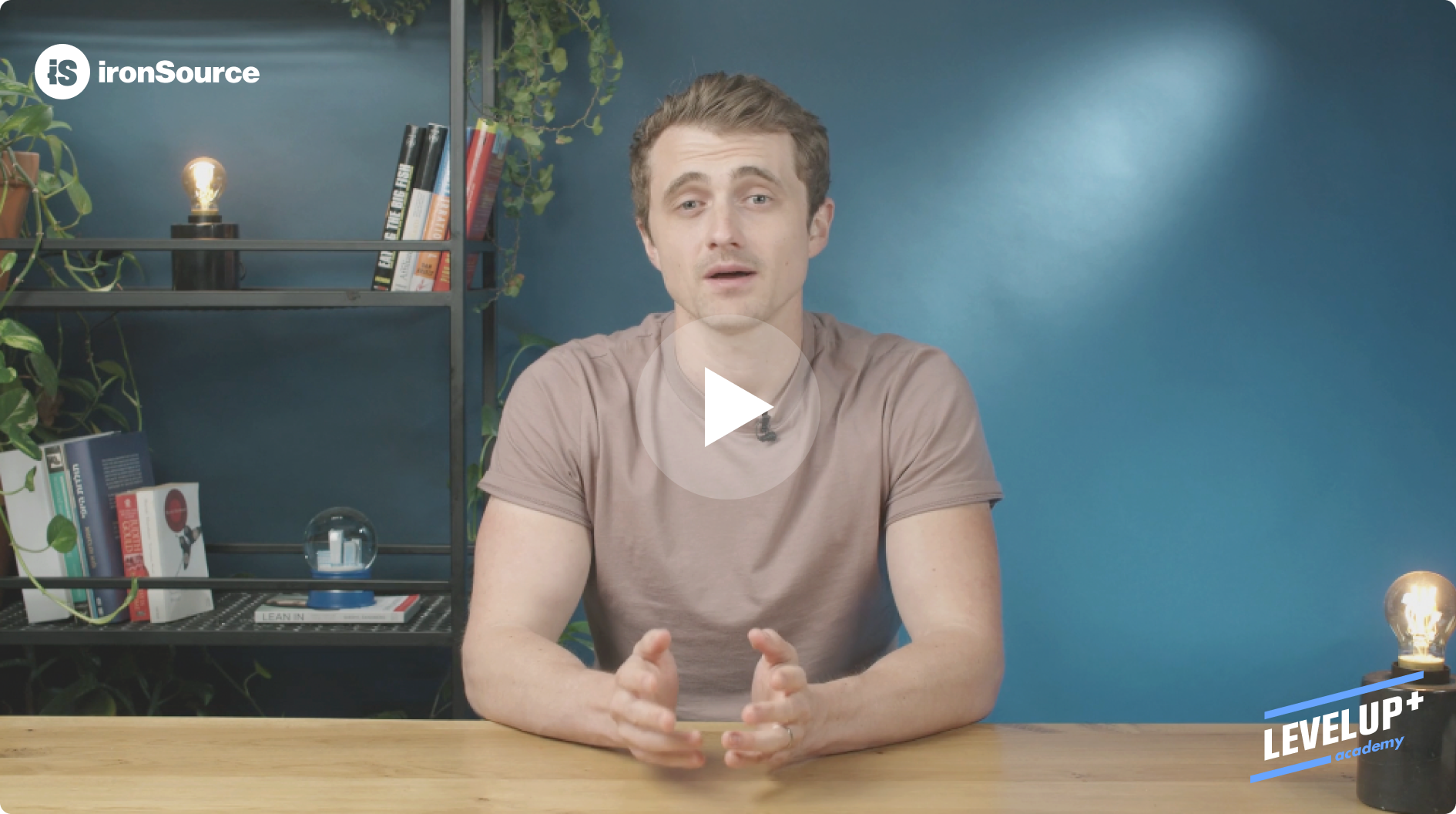 Class 16 How to make ad creatives that pop

Interactive creatives are unique in that there’s many more data points to analyze than just impressions and clicks. You have level drop offs, time to engage, and tons more. Adam Stevens, VP Product at ironSource Luna, gives you the key in-ad data metrics you should be tracking, plus tips for A/B tests that will help you optimize for success.

In this video we’re going to be talking about creative analytics for playable ads. In the hugely competitive mobile gaming industry, the strength of your creatives is one of the key factors in whether your marketing is successful, or not.

But how do you actually make great ad creatives? Well, your ability to understand your creatives’ performance and optimize them is just as important as the strength of your creativity and design.

Ad creative optimization is only becoming more crucial for mobile games. Algorithms have taken over performance marketing, so creatives are one of the last ways UA teams can gain an advantage over competitors.

The rise of interactive and playable ads has brought with it an entirely new opportunity for creative performance optimization with in-ad analytics. Creative teams are used to analyzing static or video ads by looking at output metrics such as CTR or CVR, and forming an opinion on what happened through intuition and experience. With playables and in-ad analytics, teams can finally use data to form a detailed analysis and map of what worked, and what didn’t, and make precise optimization based on these learnings.

Keep watching to hear about the key in-ad data metrics you should be optimizing for your playable ads, and my tips for A/B tests that will help you along the way.

Getting the user to interact with the playable and begin playing is the first and probably most important challenge for your creative. To measure how your creatives hold up against this, engagement rate and time to engage are two useful KPIs to track.

Engagement rate is the percentage of users who interacted with your ad. Time to engage or TTE is the number of seconds it takes for the user to interact with your ad for the first time, for instance tapping on a start button, or controlling the character.

For hyper-casual games, the goal is to have a short TTE, since it indicates that the creative is intuitive and immediately appealing. We’ve also seen a strong correlation between TTE and conversion rates for this genre.

But, a playable for a more complex game should have a longer TTE – after all, more complex games will likely require more information on the creative, and you want users to understand what’s required from them.

Figure out what your TTE benchmark is for your genre – if the data shows that the probability of users installing your game drops after the first 3 seconds, then you should make sure users engage with the ad within the first 3 seconds; this is where data meets creativity!

So what do you do if your creatives’ engagement rates and time to engage rates aren’t meeting your genre’s benchmarks?

I’d suggest you focus on optimizing the tutorial at the start of the ad. What’s super important here is to not overwhelm the user with information; avoid adding too many instructions on the screen, and focus on making the gameplay as intuitive as possible. The key is to hook the user in the first couple of seconds – that should guide your efforts. You can experiment with short messages, animated fingers and even masks which draw the user’s focus.

Time to complete and completion rate

Achieving high engagement rates is just one step in the funnel – you then need to focus on maximizing completion rates. Completion rate is the percentage of users who get to the end of the ad creative without skipping. This shows how engaging your creative is.
The key to getting high completion rates is choosing the right gameplay to showcase and ensuring that users stay involved throughout. So you really need to understand what motivates your core audience, and then leverage this in the ad.

For instance, in match-3 games, typically many users are primarily motivated by meta features – like extra stories and missions outside of the core puzzle.

So here it’s important to focus your A/B tests on the metagame and not the core gameplay.

In a midcore role-playing game, where players are strongly motivated by characters and leveling up, try focusing your creatives on the different characters and show off their traits. Then A/B test to see which characters drive the highest engagement and completion rates.

Also test out different difficulty levels – maybe in creative A, the user needs to earn 100 coins, and in creative B they need 150 coins. Users might be more compelled to complete a more challenging playable ad.

Regardless of the genre, it’s important that you look out for playables which have a high percentage of users who get “stuck”; that is, the initial engagement is strong but they never reach your completed event. Be sure to continually guide and direct the user. And remember, they’ve likely never seen your game or ad before, so don’t assume what they need to do is obvious!

We’re now onto our final KPI, and I hope you’re paying attention because it’s probably the most important.

High engagement and completion rates on their own don’t necessarily mean a successful playable ad campaign – success will be measured by the number of users who click on the ad’s call to action to install the game in the app store.

Click-to-store rate or CTR is the percentage of users who completed your ad creative and then clicked to the app store listing.

Often if the other parts of the puzzle are finely tuned, like the tutorial and gameplay, then a high CTR will be a natural outcome.

So what can you do to improve your CTR?

Try optimizing the messaging, and the look and feel of the final screen. An example of the messaging you could tinker with is your call to action. This is the button that appears at the end of the ad that prompts users to download with a message like “Download now” or “Play for free”.

Try optimizing the text in the button using what you know about your users’ motivations. Let’s say you have a midcore game and your users are motivated by unlocking and upgrading cool characters. Instead of a simple “Download now”, test out using “Level up” or “Upgrade your hero”.

Also, for users who don’t engage with your creative after the first 4 seconds, try adding an autoplay that plays the playable ad as if it were a regular video. That way you have a chance of attracting their attention by showcasing your gameplay in action.

How to structure your in-ad events to guarantee success

What we’ve discussed so far are just some of the in-ad data metrics and events you can measure.

But of course, each playable you have will have a number of unique in-ad events based on the gameplay to help you create even more data-fueled conclusions.

I often get asked by studios “What’s a good structure for my playable ad events?”. To be honest, I see a lot of common mistakes here.

What you don’t want to do, is approach the playable by putting events at every user interaction or milestone. All that will happen is you’ll end up with too much data to be able to build a good picture of your experience.

Instead, start by writing down questions about your playable that you would like answered.

With the answers to these questions, you’ll be much better equipped to create your event structure and the right metrics to track, and ultimately optimize the ad experience.

In-ad analytics: How to crack the black box of creative performance

Creatives and performance: Why I became obsessed with art and science